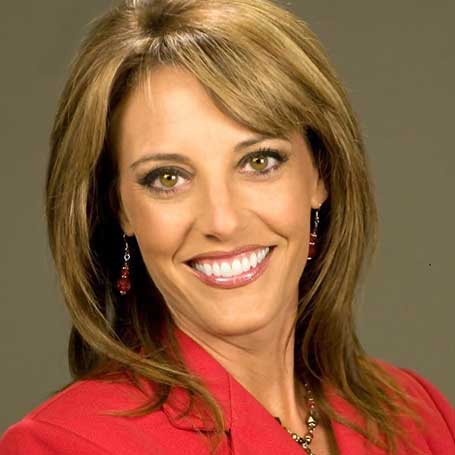 American Tv anchor, Deb Farris, is best known for her association with KAKE-TV since 1993. She is one of the oldest and loyal employees of the channel hosting 5 pm, 6 pm, and 10 pm show for which she won several prestigious awards, including Emmy and regional Edward R. Murrow awards.

Farris was raised on a farm in Iowa, along with her siblings. She holds American nationality and belongs to the white ethnicity. Well, if you are curious to know more about her then read the article below.

Deb Farris is possibly single as of now, but previously he was married to her boyfriend turned husband, Roger. The duo also shares two kids; Josie and Jake.

After the sudden demise of her husband, Farris decided to take care of her kids as a single mother. She hasn't revealed the exact date of her spouse's death nor reason, but looking through her Facebook, the unfortunate incident happened in around 2014 and 2015.

As of now, Deb is living a prosperous life with her two children and often shares their pictures on Facebook. She also mentioned, she loves spending her leisure time with her kids reading, watching games, shopping, and exercising.

Back in January 2018, Deb accused an agent and US Immigration, Andrew J. Pleviak, for sending her sexually explicit messages and sensitive law enforcement material. Later, she filed a case in court and called a press conference.

Farris revealed Pleviak first contacted her, asking if he could be her source and said he had an impetus piece of information which she would need in her future. She added,

"Then, all of a sudden, it turned inappropriate, and he was texting me things that made me uncomfortable, and I got scared."

Later, in an interview with the Wichita department, police officers photographed nearly 185 screenshots of text messages Pleviak sent to Deb. She mused,

"I was considering applying for a protection from stalking order but had not yet done so."

After the incident, Pleviak was jailed for violating the terms and conditions.

How Much is Deb Farris' Net worth?

Farris is active in the field of journalism from the early 90s, and till the date, she has reported coverage for KAKE TV. Considering her career graph, her net worth is somewhere between $500,000- $1 million. Similarly, other female journalists like Deirdre Bosa and Andrea Joyce have made an impressive sum.

Usually, the salary of KAKE TV broadcast journalist is $227,713 per annum, so, she might earn the same figure. More to that, she is an Emmy award-winning journalist, so, surely, Deb receives extra incentives and bonuses.

Deb started her journalism career soon after graduating from Fort Hays State University in KSNT as a reporter, anchor as well as producer. Later, in 1990, she traveled to Saudi Arabia along with her team to cover the first Gulf crisis.

Along with two regional Edward R. Murrow awards, she has also been awarded the Emmy Award for her work on KAKE News at 4.