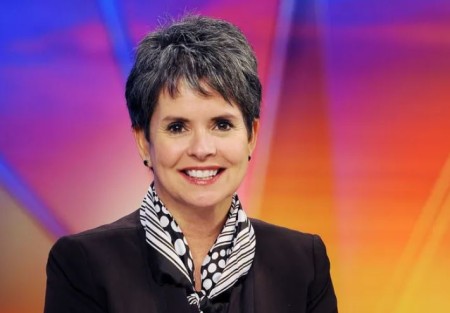 The 16-time Emmy Award-winning journalist, Demetria Kalodimos is a former TV news presenter who was a longtime anchor at WSMV-TV, an NBC affiliate in Nashville. She used to appear on weeknight broadcasts at 6, and 10 p.m. Demetria served for more than 30 years and was the longest-serving anchor at WSMV. One of the most respected news anchors of Nashville, Kalodimos, sued WSMV in 2018 for age and gender discrimination. The federal lawsuit was settled in January 2020.

Demetria was born in 1960 in Morton Grove, Illinois, the United States to parents, Mike and Betty Kalodimos. She is 60 years old as of 2020. Unfortunately, Demetria hasn't revealed her exact date of birth. She graduated with a bachelor's degree in music education from Illinois Wesleyan University. Likewise, she earned a master of science degree in journalism from the University of Illinois.

Demetria's Husband is a Renowned Songwriter

Kalodimos has been married to her husband, Verlon Thompson, since 2008. Verlon is a renowned country singer, songwriter, and guitarist. The couple dated for eight years before tying their wedding knot on October 11, 2008. Their wedding ceremony took place at Thompson's cabin in Fernvale, Tennesse.

As of now, Demetria and her spouse has been married for nearly 12 years. However, they don't share any children. The couple first met in early 2000. Do you know it was Demetria who made the first move and proposed to her future husband?

The TV anchor revealed in an interview that she immediately fell in love with Thompson upon seeing him for the first time. She was struck by his country accent and his musical talent. In a music club hallway, Kalodimos chatted up with Verlon, asking for a soup date.

After twenty years, the couple is still very fond of each other. Additionally, Thompson describes his union as the pig farmer and the opera singer. Kalodimos once said: "We are from totally different geographical places, but ... as you live together and grow together, we’re very much alike in a lot of different ways."

Demetria and Verlon work together and have collaborated on several projects. In 2017, they created a TV interview/performance songwriters’ series called 'Barnegie Hall' which debuted debuts on PBS stations.

Demetria was previously married to ex-husband James Mauries in 1984. They were married for 13 years until their divorce in 1997. James sued Demetria for divorce, saying that she threatened to kill him if he left her. He even claimed that she tried to physically abuse him after he moved out of their joint house.

After their separation, Kalodimos got a restraining order and was forbidden to harras, abuse, or threaten Mauries. As for divorce settlement, James named a house to his ex-wife located in Granny White Pike, Tennessee.

Although she is no longer with news anchoring, Demetria is still one of the most recognizable faces in the Nashville community. The average salary for evening news broadcasters is over $100,000. Holly Thompson, who currently works as morning anchor for WSMV, also has an impressive net worth.

Apart from having a decent fortune, Kalodimos is involved in active charity. In early 2020, she donated a significant amount of money to The Community Foundation of Middle Tennessee. Also, Demetria founded a documentary film company called Genuine Human Productions.

Over her thirty years of a professional journalism career, Demetria has won several prestigious awards. As mentioned, she has won sixteen Emmy Awards along with two National Headliner Awards. Kalodimos received the Investigative Reporters and Editors Award for television investigative journalism in 1995 and 2007.

Moreover, in 2005  she was the Favorite Local News Anchor, Out and About Newspaper. Likewise, she received the Honorary doctor of humane letters from Illinois Wesleyan University in 2007.

In early 2020, Demetria settled a year-old federal lawsuit that accused her old TV station of age and gender discrimination. Kalodimos's contract with WSMV expired on December 31, 2017, and was not renewed. She was the longest continuously serving evening news anchor ever at WSMV.

Kalodimos said, then she only got a letter on her desk, which stated “no conversation, no face to face meeting, no thanks.” For that situation, the current station vice president/general manager Rene LaSpina apologized to Kalodimos.