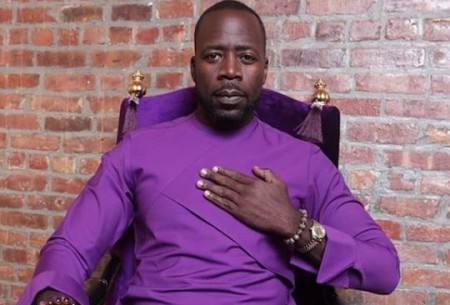 The 38-year-old, Demetrius Grosse is an American actor and producer best known for his role as Rock in movie 'Straight Outta Compton,' Emmett Yawners in the Cinemax television series 'Banshee.' Further, he is also a successful producer.

Despite a succesful career, Grosse was accused of sexually harassing his The Rookie co-star, Afton Williamson. However, in September 2019, a statement was released that he was wrongfully accused and was being cleared of the accusation.

The Sirrocco Award winner, Demetrius Grosse is a happily married man. He tied the knot with a beautiful woman named Ashley Nicole Sherman. The couple has been together for over ten years and is still going strong.

Grosse and Ashley haven't revealed their dating history, but it appears they are longtime partners. The husband-wife duo exchanged their wedding vows on August 9, 2009. Ashley, who is Demetrius girlfriend-turned wife, is the founder of a retreat brand called, Ave 51.

Demetrius and Ashley always share adorable pictures with their daughters on their social media. They share three children from their marriage and has a blissful life.

The talented actor and businesswoman share three children from their nuptial. They have two sons and one daughter. The couple welcomed their first child, a son named Ru on August 24, 2014.

Similarly, their second son was born on June 3, 2015. Further, Demetrius became a father for the third time, when his daughter named Yah’Zulay Gross was born on July 30, 2018.

Grosse who appeared on HBO's series Westworld alongside Bridgid Coulter enjoys a net worth of $15 million as of 2019. His source of wealth comes from acting mostly in television and films. But, how did he managed to make such a fortune?

Well, by the age of 17, Grosse began his acting career. He has performed on the stages of Oxford, England, in Washington DC, and Cape Town. Moreover, the multiple awards winning actor bags a handful of cash from his roles on television shows.

Apart from acting, Grosse is actively involved in producing short films and documentaries. He was worked as an executive producer and associate producer on projects like A Quiet Fire, Moonshiner, Godfrey, and Last Cry for Katrina.

Sexual Misconduct: Was He Guilty?

Grosse's fans were shocked when Afton Williamson, one of his co-star on the ABC drama, The Rookie accused him of sexual misconduct. She allegedly announced the statement on August 4, 2019, and told showrunner about the issues. Further, she also said that the show's hair department head sexually assaulted her.

All the accusations were proved false when an independent third-party investigation was ordered by production studio eOne and concluded on September 17, 2019. Grosse's attorney released a statement which highlighted that Grosse was wrongfully accused.

To know about your favorite idol, please follow marriedceleb.