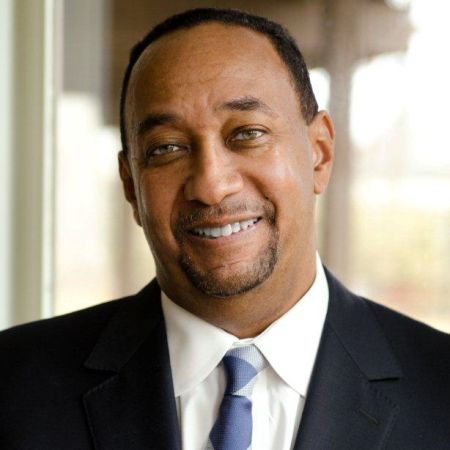 Some people come to limelight after years of their hard work and dedication pays off. On the other hand, Some rise to fame after being married to reputed personalities. Derek W. Bottoms has a similar story to his rise to fame.

Derek W. Bottoms was born in mid-1965. The exact information about his birth date is still under investigation. Derek is among the two children born to Celestine Bray Bottoms and her husband, Lawrence Bottoms Jr. Derek was born and raised in Atlanta, Georgia. Derek has a sibling named Darian Bottoms. Derek graduated from Georgia State University College of Law in 1994.

Derek has been longtime married to his wife, Keisha Lance Bottoms. The love birds first met in 1991, while both were students of Georgia State University College of Law. The love birds dated for sometime before walking down the wedding aisle.

Derek and Keisha tied their wedding knot in October 1994 at Atlanta's Ben Hill United Methodist Church. They had a private wedding ceremony. Also, Non of them were famous at the time, so not much about their wedding is known to the media.

At the time of their marriage, Both of them were very much early in their career. They did not want to start a family soon. So, in the late 1990s, The couple would not conceive a biological child. They tried a lot but couldn't.

In 2002, The pair decided to adopt a baby. So, after the first adoption. In 2008, They took another baby boy. Nothing much about their parent's information is shared with the media. Then in 2010, They adopted a twin baby, a boy, and a girl.

The family of six is living a happy and beautiful life. Keisha is very much active in the community, raising awareness about adopting babies.

Total Net Worth and Income of Bottoms Family

Derek Bottoms is vice president of employment practices and associate relations at Home Depot. He has been with the Atlanta-based company for about 18 years, previously having worked for a law firm. Derek Bottoms has an estimated net worth of $5 Million which is similar to Christian Ponder.

Keisha Lance Bottoms and Derek Bottoms own residences in Atlanta. They also own a home in Martha's Vineyard, which came under scrutiny during her mayoral campaign. The house, which is located in the island's Oak Bluffs neighborhood, was purchased for $1,010,000.

Derek has been working with various companies and organizations in different senior level. he was an associate at the law firm of Powell Goldstein, specializing in employment law.

Derek's wife, Keisha Lance Bottoms, has an estimated net worth of $2 Million. Lance earns $135,000 annual salary for working as a Mayor of Atlanta. Also, She receives $60,300 for her position on the City Council. On July 6, 2020, Keisha announced that she had tested positive for COVID-19.