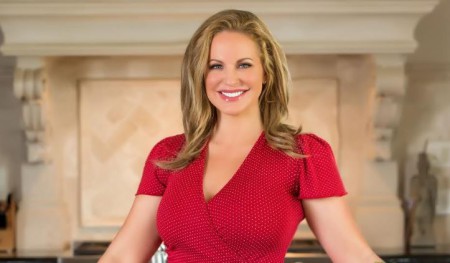 The 42-year-old, Divini Rae is an American motivational speaker, author, fitness expert, and health/wellness advocate. Rae has gained international fame as a cover model for leading lifestyle publications. Well, she has appeared on Playboy Magazine and Australia's Inside Sport Magazine.

Divini Rae Sorenson was born on July 31, 1977, in Alaska, United States. Her father was a fisherman, and she grew up in a fishing village. Also, she belongs to Swedish/English/Cherokee Indian heritage.

Rae studied psychology and journalism at an Oregon College on academic scholarship before a vacation in Sydney, Australia during her junior year at school.

Fame as a Model

Divini was discovered by a female photographer on Bondi Beach in Sydney. Afterward, she began a successful career in lingerie, swimwear, and commercial modeling. Besides, she also worked as a makeup artist.

Over the past few years, Divini developed experience in numerous areas of the entertainment industry. Another fitness celebrity, Paige Hathaway, is also a renowned fitness expert and media personality.

The 42-year-old, Divini Rae is a married woman and has a blissful married life with her husband. Divini Rae married Winston Fong on August 8, 2009. Her longtime husband is a renown Invasive Spine Surgeon and works at Mcbride Hospital.

As of 2019, Rae and her spouse have been married for over ten years. In their decade long relationship, the couple hasn't been involved in any rumors. The exact timeline of their dating history is unavailable, but still, they are living happily raising two children together.

As of now, Divini lives in Oklahoma City with her husband and their two young daughters.

From their marriage, Divini and Winston share two children. The couple has two beautiful baby daughters which they welcomed in late 2013.

Divini Rae hasn't revealed much about her children. As of now, they are around six years old. Rae and Fong raised their children in a pleasant environment.

As of 2019, the former Playmate Divini Rae has a net worth of $400,000. The primary source of her earnings comes through modeling and her fitness profession. Fitness model and female bodybuilder, Lindi Nunziato has higher earnings.

Rae has a certificate in Health Coaching and Fitness Nutrition with the International Sports Science Association. And as per sources, she is quickly becoming recognized for being one of the most influential health and wellness experts in middle America.

Additionally, Rae has appeared on the popular television drama shows like Above the Law, Home and Away. Currently, she runs her website through which she shares fitness tips and tricks.

The detail about Divini Rae's annual income is over $45,000. She is a certified health coach and nutrition expert. She is also the founder of her own monthly magazine called, SWAY (Sydney Will Amaze You).

Further, she also raises funds and donated for charity organizations such as Save the Children and Infant Crisis Center. Further, she is also the author of a fitness book.

As a Playboy model, she traveled worldwide and has spoked at press conference, hosted events, and became known for her openness and authenticity.

Despite being in her early forties, Divini Rae looks incredibly youthful. Since the beginning of her career, Rae has been wooing with her toned physique and gleeful appearance.

In her website, Rae has revealed about her workout regime and diet. She regularly performs intense exercises and eats a low-calorie balanced diet.