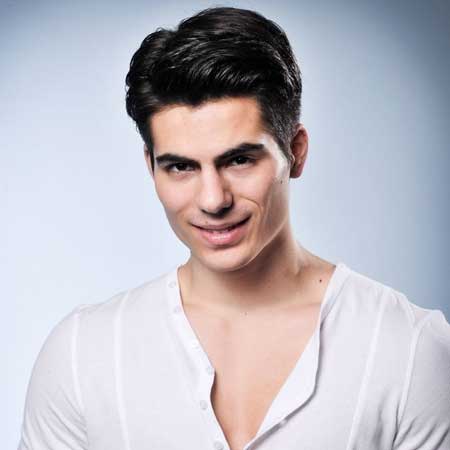 Dominique Caparo is a Swiss model who was also a contestant on Mr. Switzerland. Despite his career, he became famous after his affair with a You Tuber Michelle Phan.

Caparo was born on 1st May 1988, in Visp, Switzerland. Born to his Italian father and Swiss mother, Monika Thoni, Dominique is of Mixed ethnicity and holds a Swiss nationality.

After a short period, Dominique appeared in Mr. Switzerland as a contestant and received the title of the runner-up.

Caparo then shifted to Los Angeles to build up his career in modeling and acting. Fortunately, within a short period, he was offered a modeling contract with Jaffa Models in Illinois.

Is Dominique In A Relationship Or Is He Single?

Swiss model is in a relationship with his girlfriend Michelle Phan, an entrepreneur, and make-up artist. They started dating in 2010.

But, the couple first met in Paris, France only in 2012 after dating for almost two years. They were in long-distance relationship which worked out well.

Additionally, the couple is very happy with each other and shares pictures on Instagram and other social media. Dominique can be often seen in the YouTube videos of Phan.

They further were also rumored to be engaged. They, however, remained silent on the speculation.

His Girlfriend Disappeared From Internet For Nine Months

Back in 2017, Phan revealed that she was suffering from depression and due to which she took off from the internet. At this time, people even thought that she was dead.

To heal the depression, she visited several countries. And now, she is again back in the industry and doing well since then.

As a Swiss model, Caparo makes a good amount of money via modeling contracts, endorsements. A model in Switzerland earns more than $5000 every month. Therefore we can assume that Dominique has a good amount of salary.

As of 2019, his total net worth is estimated to be $500 Thousand. Whereas, his girlfriend Michelle, has a total wealth of $3 million, according to The Richest.