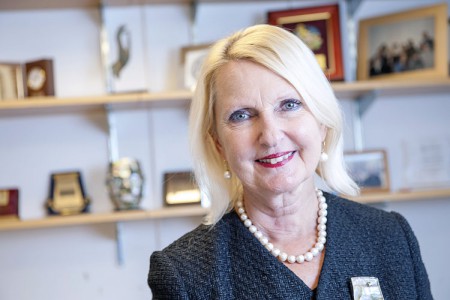 Pioneer surgeon, Dr. Maria Siemionow, who sucessfully performed the first face transplant in the US on a woman named Connie Culp is the renowned American surgeon.

Back in 2004, when she announced she had received approval to perform the world's first full-face transplant, Maria was bombarded with media attention. So, let's know more about her personal and professional life in the article below;

The 69-year-old doctor is a Polish transplant surgeon and scientist who is a pioneer surgeon in the face transplant field. In 2008, Maria performed the world's first near-total face transplant.

The surgery was performed on a woman named Connie Culp. The 45-year-old patient from Ohio was extensively disfigured by her husband who shot her with a shotgun in the face in 2004.

Married to a fellow Doctor

The doctor duo Maria and her husband Wlodzimierz Siemionow married at the town hall on April 27, 1975. The couple first met during their college days on Poznan. Being from the same profession, the couple realized that they had more in common than an ability to translate English terms into Polish.

In her book "Transplanting a Face: Notes on a Life in Medicine," Maria revealed that falling in love was more exciting than her usual research. Their marital solidarity has crossed over four decades. It is quite amusing that despite being married for so long, their relationship never touched by controversies.

Additionally, the couple shares a son, Dr. Krzysztof Siemionow who followed their parents footstep and enrolled in medical profession. He currently works as a spine surgeon in Poland at UIC.

Among the Richest Plastic Surgeon

The major source of her incomes comes from her revolutionary medical procedure. The average salary for an experienced surgeon is up to $280,000, and the payroll could go up to $350,000. On the other hand, plastic surgeon like Dr. Marcus Crawford also inspires from Maria achievements and journey.

Maria has retired from her profession, but she currently teaches surgery at the Lerner College of Medicine in Cleveland. Therefore, there is no doubt that she earns a massive income from her career.

For her research on facial transplantation, Maria received the 2007 James Barrett Brown Award from the American Association of Plastic Surgeons. Her work has won her worldwide recognition including the Polish Order of Merit.

She is also the former president of the International hand and Composite Tissue Allotransplantation Society and the American Society for Peripheral Nerve.

To know more about your favorite star, please follow, marriedceleb.com.