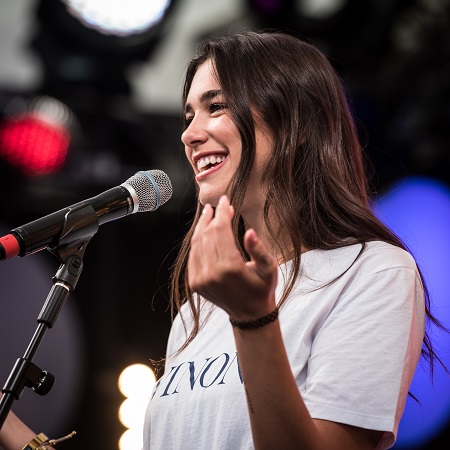 Dua Lipa is an English Two times Grammy Awards' Winning singer, songwriter, and model. She started her musical career at age 14 after started uploading cover songs on her YouTube channel by other artists. Throughout her musical journey, she has released various hits singles including New Rules (2017), IDGAF (2017), Be the One (2015), and One Kiss (2017).

She was born on August 22, 1995, in Westminster, London, the United Kingdom to the Albanian parents from Kosovo who left Pristina in 1992. Her mother, Anesa Lipa works in tourism while her father Dukagjin Lipa works as a marketing manager. Further, Dua has two younger siblings, Rina Lipa and Gjin Lipa. She holds British citizenship and is of Kosovar Albanian ethnic background.

English singer originally from Albania, Dua Lipa is officially off the market. Then are you excited to know who is her love of life? Well, her boyfriend is none other than model Anwar Hadid.

Dua and Anwar, model Gigi and Bella Hadid's younger brother, started dating in early 2019. Likewise, their love rumors glittered when they were spotted kissing and looking at all kinds of cozy at the British Summer Time festival in Hyde Park on 6 July.

Recently on June 14, 2020, the have celebrated their one year of dating and took to Instagram to gush about having each other in their lives. " Nothing sweeter than 365 days joint at the hip with you", Lipa, 24, has captioned her post by posting a series of candid photographs of two over the last year.

Now, Dua and her model boyfriend, Hadid, 21, are believed to be in lockdown at an Airbnb in London together. More in the midst pandemic, they went to visit Hadid's family ranch in New Hope, Pennsylvania,

Her Past Love Relationship

The Physical singer already had a breakup from her longtime boyfriend, Isaac Crew, a British chef, and model, before staring dating, Anwar. The former lovebirds who began dating in 2013 have enjoyed them on and off love romance for about five years.

They had their first break up in 2017 before getting back together in January 2018. Then again the couple had reportedly ended their relationship on good terms after 18 months.

Furthermore, the 1.73 m tall was previously in a serious relationship with the American singer and model, Paul Klein. They were together for five months. Klein is seven years older than she is.

The London based pop star, Dua Lipa has already achieved enormous fame and name worldwide since her career beginning in 2015. So, there is no doubt that she has accumulated a huge amount of money. As of easy July 2020, she has an impressive net worth of $16 Million.

Lipa has amassed her whole net value through her professional career as a working of a singer, model, and songwriter. In 2017, she finally released her self-titled debut studio album where the album led #5 in the UK as well as #3 in Ireland. Then, she released nine singles, including New Love, Be the One, New Rules, IDGAF, Scared to Be Lonely, Blow Your Mind,  Break My Heart.

Her number one single New Rules peaked #1 in the UK and att number six in the US. More to that, she also produced the EP The Only in 2017. Over her career, Lipa has collaborated with famous artists like Sean Paul and Martin Garrix, and among others.

Recently on 27 March 2020, she released her second album Future Nostalgia. Besides her singing career, she has done modeling as a model for Next Model Management in New York, Paris, Milan, London, and Miami.