Home married Ella Rodriguez Full Relationship Detail, From Dating To Being A Mother

Ella Rodriguez Full Relationship Detail, From Dating To Being A Mother 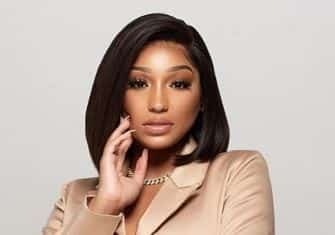 Twenty four years old, Ella Rodriguez is the current Instagram star and entrepreneur. Also, she is the founder of an eyelash company called Slay By Ella.

Now, let's dig into her personal life and know her better.

Ella Rodriguez's boyfriend is a rapper

Yes, Ella's boyfriend, Artist Julius Dubose, Aka "A Boogie wit da Hoodie" is a rapper, songwriter, and singer. One of his well-reconized singles is Look Back at It which climbed at number 27 on the Billboard Hot 100. The pair are known to be dating for several years as of now.

Both seem to be very deep in love and enjoy one another's a company very much. They are often seen uploading each other photos in their respective social sites where they are seen spending quality time together.

On Valentine's day of 2017, the celebrity duo invited their daughter, Melody Valentine Dubose. Eventually, both father and mother posted on their respective social media account that, they are very happy to welcome a new member of the family.

Fans all over the world congratulate the duo with lots of blessings and good wishes. They are often seen posting the daughter's photo in their social media account.

Further, in January 2020, Ella announced publicly that the couple is expecting a second child. Which is due in June 2020 and impressively they found out the baby is a boy on the 16th April 2020.

Ella Rodriguez break up with her boyfriend

Yes, the pair split their relationship after Ella found out the rapper is cheating with her despite being in a loyal relationship. A-Boogie even apologized to her publicly in his Instagram account stating that "You Will always be my best friend".

He further added  'Smh It really takes losing what you have to love and appreciate what you had. I hate to be the type to regret things but I f***ed up like crazy with you and I regret every little mistake even tho it made me open my eyes and realize what really matters to me.'

Further, with lots of drama and all the pair finally got reunited and seems very much happy and supportive than before. They even upload one another photos were they are seen exchanging loves. And not to forget they are expecting another baby boy.