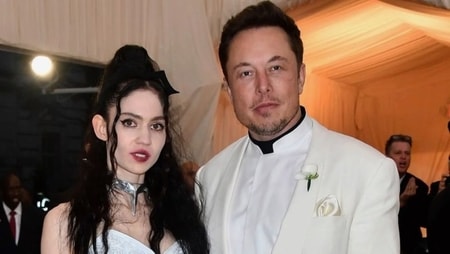 What a way to start the year 2020? Isn't it guys? We're in the second week of January 2020 and already there's a buzz of a celebrity child next door.

Tech Mogul and Space X founder Elon Musk and his girlfriend Grimes are expecting a baby. According to her Instagram post, people are already speculating the name for the unborn baby. In the uncensored photo, Grimes showed her nude body and her pregnant belly depicted a fetus on her Stomach.

The original image, however, is removed from the internet because of the violation of community guidelines. In the censored version, she is wearing a coat that's open at the waist showcasing her pregnant belly. Many are still confused as to whether Grimes is really pregnant or it is some sort of artwork.

The dilemma may be because of no caption on the pictures. Grimes, however, has commented on her pregnancy. She wrote,

"Being Knocked Up is a very feral & war-like state of being. Might as well be what it is".

The Twitter world has gone gaga over the unborn child of tech mogul. Musk also tweeted a baby emoji and other than that, he has remained silent. Fans of Tesla founder and Canadian singer are tweeting what could be the name of the child?

Elon Musk and Claire Elise Boucher A.K.A. Grimes first appeared in public together at the annual Met Gala in 2018. The couple seems to dive into parenting in 2020 with their first child together. Musk previously became father to six children from his two marriages.

Space X founder walked down the aisle with Justine Musk in 2000 and ended their marital relationship in 2008. After that, he tied the knot with Talulah Riley twice; once in 2010 but it ended in divorce in 2012. The duo decided to give their romance another shot and exchanged wedding vows in 2013 but it failed again in 2016.

For a brief period of time, Musk also dated American Actress Amber Heard in 2016. Grimes, on the other hand, dated Devon Welsh from 2007 to 2010.