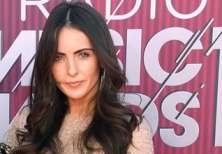 Emily Canon is an American volleyball player who used to be the BYU Cougars roster in 2017. Fame and Fortune stepped into her doorstep after marrying a popular musician Max Schneider.

Born on May 9, 1998, in New York, Emily attended Park City High School, and she has served a mission for The Church of Jesus Christ of Latter-day Saints in Argentina.

Miss Cannon turned into Mrs. Schneider after getting married to Max Schneider on April 2016. Her husband is an American singer-songwriter, actor, and model. However, it's a bit unclear when these couples actually meet.

The lovely couple got married in Manhattan. Their wedding was a sensation because no one expected their marriage, but somehow, they tied in a knot and currently shares very pleasing marital life. If you want to know how their love started, then keep scrolling.

How did Emily's Love Story begin?

The young couple first meets at Halloween, where Emily dressed up as a Game Of Thrones Khaleesi. But at that time, the couple did not really talk. After their first encounter, Max went on Tour with Fall out Boy, and on that tour, one of Max and Emily's mutual friends introduce with them.

After sort introduction,  Max asked Emily for a date, and then their love starts to bloom. After dating for several months, they tied in a serious relationship, and since then, they have remained happy and committed couples.

Glimpse of their Wedding Ceremony

The marital ceremony of Emily and Max was held on behalf of 75 of their closest family and friends. They took wedding vows at Max's parent's loft, which is actually where his parents got married as well.

The decoration at their wedding event was minimal, but they put lots of beautiful and lovely flowers across the Loft. During their marriage, they skipped many wedding traditions such as bouquet toss and first dance.

Furthermore, Emily wore a silver color gown with an astonishing touch of a veil on her head. She has not put any kind of expensive jewelry instead, she only puts a silver reckless gifted by her husband.

Similarly, Emily's husband Max suit, pant and tie was black. Their marriage was kind of like romantic, where after exchanging a wedding vows, both of them run away to enjoy their mini-moon at the Ludlow Hotel together.

Written A Song For Their Marriage

When someone married musician then, obviously their they express their feeling through music. Likewise, Emily's husband also dedicated a song to his beautiful wife on their wedding day.

Later on, Max uploaded his composition on YouTube and put his song on their wedding video. Although Emily's husband seems to be very romantic, he has been within a couple of relations before Emily. So find about her husbands' previous affairs.

The 27 years old singer and songwriter has been in a relationship with Ali Castro in 2012 but their relationship only lasts long for a year. After break up with Castro, Emily's husband started to date an American Actress Lulu Antariksa in 2013.

Again, Max's love life did not work out for a long and later on, he got an affair with the lady known as Lura. After the break with Lura, he finally meets with his present spouse Emily. Now let's find out how much wealth is earned by Emily.

In addition, most of the wealth came through her famous singer and musician spouse who probably earns around $500,000 a year just like another star musician Tyle ward who makes between $299 - $4.8 thousand monthly.

Besides their earnings, they currently reside in New York where their apartment is full of luxury. At the same time, the young couple lives to ride their own branded cars like BMW, and Audi.