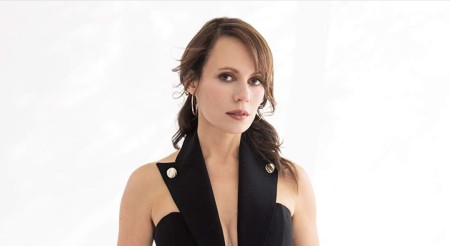 Emily Swallow is optimistic after seeing her continual growth and achievement through hardships and dedication that she gave all to her acting. So, happiness comes in her life with the joy of honors while daring a creative effort to the attention seekers.

Swallow was born on 18th December 1979 in Washington, D.C., and grew up in Sterling, Virginia, as well as Jacksonville, Florida. Other than that, she is now committed. So, what're interesting things happening in her life? To explore more about Swallow's personal life, read the article.

40-years-old actress, Emily is now living in a joyful marital relationship with an actor, Chad Kimball. The couple united as husband and wife on 26th August 2018 in an oceanside resort in Vashon, Washington, where all of their wedding guests came from the boat.

A Seattle-based boutique event, All The Flutter, and Teressa Johnson Studio helped the couple's marriage to succeed perfectly. Also, Jillian Kimball Alvis, a PNW designer put some glimpse with the wedding lights at the nuptial.

The bridegroom was looking as perfect as they are in their wedding ceremony, where Emily wore a sleeveless power pink glitz glam tulle wedding gown. On the other side, Chad was wearing a dark blue suit, tying with a blue tie and a flower on his left pocket.

At the end of their nuptials, the pair invited all of their guests to the reception party. The couple then performed a beautiful dance on the beat of Live Oak Audio Visual, musical event planners in the Pacific Northwest, which made their wedding memorable.

The beautiful pair had their first encounter at a non-profit professional theatre, La Jolla Playhouse at the University of California, San Diego's campus. At that time, Emily came to saw a musical play, Come From Away when Chad also came to meet mutual friends, Jenn Colella and Joel Hatch.

The duo then interacted for the first time by their mutual friends, Jenn and Joel at the theater. The two shortly began dating, and since then, they're enjoying their company. They celebrated their first marriage anniversary on 26th August 2019 by wishing each other via Instagram.

What is Emily's Total Net Worth?

The Mentalist star, Swallow has an impressive net value of $2.3 Million as of 2020. She earns a fruitful salary from her profession. Meanwhile, in the United States, an actress makes an annual income of $56,741. So, her yearly payroll might be in the same range.

On the other side, Emily's spouse, Kimball grasps a net value of $5 Million and receives a handsome remuneration throughout his Broadway musicals. Just like him, some other theatre actors, including Elliot Kingsley is earning a decent income.

A Well-known Filmography of Swallow

Check out the interview of Emily Swallow with the Celebrity Page TV!

Emily also featured in Neil Burger's comedy-drama movie, The Lucky Ones in 2008. She also acted in several short television films, The Odds and Forget Me Not. Similar to her career, some other notable actresses like Freddie Simpson also gained fame for her prominent roles.