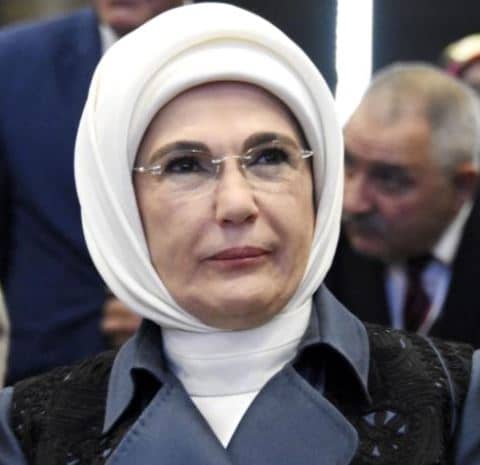 Emine Erdogan is one of the powerful personalities in Turkey. She is known as the current first lady of Turkey. Her husband Recep Tayyip Erdogan is currently serving as the 12th president of Turkey.

Emine was born in Istanbul, Turkey on 21st February 1955. She is the fifth and only daughter of Hayriye and Cemal Gulbaran. She is very much active in social activities since her youth and was the founding member of the Idealist women's Association. Let's take a tour of her personal life.

Exchanged Wedding Vows with the President of Turkey

A normal Turkish girl met the love of her life, Recep Tayyip Erdogan back in 1977. At that period of time, she was involved in events organized by the Ladies Foundation for Science and Culture and National Turkish Student Union.

The young and talented couple exchanged their wedding vows on 4th February 1978 in front of their family and friends. It was a great ceremony where the couple's most of the family members and friends congratulated the newly married couple with lots of blessings.

Emine is the Mother of Four Children

The current first lady of Turkey, Emine is happily married to her husband, Rebel for more than four decades or forty-two-years inexact. In this marital duration, the pair are blessed with four children.

The eldest one Ahmet Burak was born on 4th July 1979 who is currently forty years old. Ahmet is a Turkish renowned businessman and is the owner of MB Denizcilik. In 2001 he married his longtime girlfriend, Sema Ketenci.

Necmettin Bilal is the second child of the pair he was born on 23rd April 1981. He is also a Turkish businessman and is married to Reyyan Uzuner back in 2003. The two are blessed with two children from their nuptials.

All Off-Springs are Successful Personal

Similarly, the third child, Esra Erdogan was born in 1983. She is Turkey's renowned sociologist who exchanged her wedding vows with Berat Albayrak, a Turkish businessman and politician back in 2004. They are blessed with three children.

Finally, the youngest of all Sumeyye was born in 1985 who is also affiliated in business. Previously she was chief advisers of her father who was prime minister at the time. She is happily married to her husband Selcuk Bayraktar and shares one child with him.

How Rich is the current first lady of Turkey?

Emine's net worth has been estimated yet, however, it is believed to be in over Million dollars. But regarding her husband, he is a massive moneymaker. He has a wealth of $50 Million according to the Celebrity Net Worth. As ahead of the state, his annual salary is $65,000.

Before entering the politics he was famously broke. As previously served as Prime Minister he transferred at least $15 Million into offshore trusts. According to US diplomatic cable he has controlled at least 8 Swiss bank accounts.

Similarly, the German newspaper Bild conducted an investigation that their eldest son has a net worth of $80 Million without a clear source. In 2018 he appointed himself as the head of Turkey's $40 Billion sovereign wealth fund.

As of now, the pair are living a very lavish lifestyle in a luxurious way.