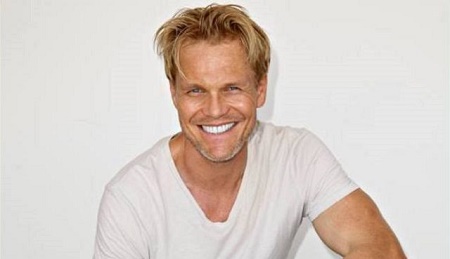 Erik Asla is a Norwegian photographer whose images have appeared in GQ, Allure, and Elle magazines. He also worked closely with brands such as Saks Fifth and Calvin Klein. However, he is famous as an ex-boyfriend of the supermodel, Tyra Lynne Banks, known as BanX.

He was born on May 21, 1964, in Norway. Asla holds Norwegian citizenship and belongs to the white ethnicity. Further, there is no other information regarding his family background to the media.

Erik and Tyra Were Together for Five Years

6 feet 3 inches tall, Erik and her girlfriend, Banks, started dating in 2013 after meeting the first time on the set of Norway’s Next Top Model in 2012. However, these exes pair tried to keep their relationship private but after spotting together in 2015, they made it official.

Despite the age difference, they even worked well together and were so in love with each other. Within two years of being together in 2014, the couple wanted to have a child, but they couldn't do it because of Tyra 's fertility problem.

As such, the famous photographer and 46-year-old American Got Talent host welcomed a baby boy, York Banks Asla. The child was born via gestational surrogate in January 2016 when she underwent IVF procedures in hopes of reproducing.

However, the lovebirds announced their spilt in 2017 after being together for five years. Even after the seperation, the two are still in amicable terms and share their custody of their 3 years son. America's Next Top Model creator loves being a mom and is very hands-on, a source says.

Yes, Erik is not the only dad of York as he shares three children from his 18-year past marriage. The daughters are Tatjana Asla, 24, Taylor Asla, 19, Tatum Asla, 11. However, the mother of three girls remains away from the spotlight.

The youngest daughter Tatjana is a rising model who signed by Elite Modeling Agency and LA Models. In the same way, she made her modeling debut in the glamorous industry at NYFW in the spring of 2015. She recently featured in Bakareh's Fall 2015 catalog.

Is Asla Dating Anyone Currently?

Now, talking about his current love life, Erik does not seems to be involved in any kind of love affair. In fact, after scrolling his Instagram image, we found out he never posted or mentioned any girls as his new partner.

On the other hand, his ex-lover, Tyra, who was born on December 4, 1973, is rumored to be in a romantic relationship with Louis Belanger-Martin, a Canadian businessman. These new pair has been together since August of 2018 and is still going strong.

Nevertheless, Louis shares a 12-year-old son whom he co-parents with his divorced wife, Valerie Martin Scraire. Now, he lives in Los Angeles with his daughters.

Working as a fashion and commercial photographer, Erik has amassed a huge amount of money. As of 2020, he has an estimated $1 Million net worth which is alike Peter McKinnon and Brian S. Gordon. Further, he also makes extra amount from endorsement agreements and public appearances.

Asla, who began his career as a junior employee at Herb Ritts, is now engaged in The Stillness of Motion. His work has also been published in popular magazines such as Glamour, Allure, Elle, Costume, GQ, Bazaar, Tatler, The New York Times, Marie-Claire, and many more.

In addition, 56, Erik also done TV commercials for brands such as Calvin Klein, Audi, America's Got Talent. On the other hand, his former partner, Tyra Banks, has a net worth of $90 million as of 2020.  She made this heavy amount throughout her strong career as a tv personality, actress, singer, model, and businesswoman.