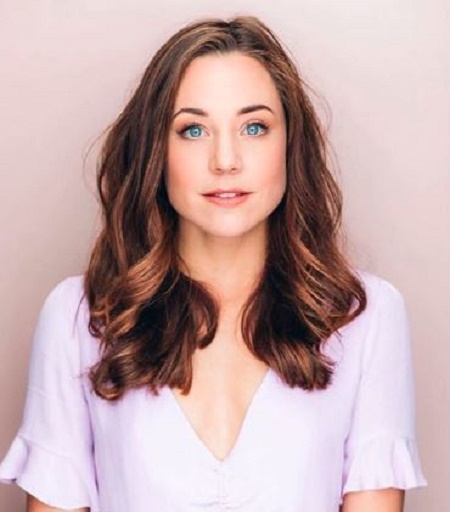 An American actress/singer, Erika Henningsen never disappointed to impress audiences with her excellent talents on theater, television, and movies. Erika is best known for her role as Cady Heron in the 2018 Broadway musical, Mean Girls. She won a nomination for an Outer Critics Circle Award as well.

Erika Leigh Henningsen was born on August 13, 1992, in Moraga, California. Likewise, she is the youngest of three daughters to the parents Phil and Marybeth Henningsen. Erika studied at the University of Michigan with a BFA in musical theatre in 2014. Also, she attended the Royal Academy of Dramatic Art in London.

Is Erika Henningsen Dating anyone Currently?

To quote this beautiful actress' romantic life is a little complicated. It seems that she might be dating her co-star, Kyle Selig, an American actor, dancer, and singer. He is best known for his role as Aaron Samuels in Tony-nominated musical Mean Girls (2018), where Lizzy Caplan also featured.

As per their Instagram post, after their first meeting on Mean Girls Broadway, this happy couple might have started to date since April 2018. And they've been able to maintain their relationship for about two years since the day.

The love passion of the 27-year-old stars Erika and Kyle can be seen from their social media pages, as they do not hesitate to see one another in public. Mean Girls' stars seem to be in a lovey-dovey relationship with each other and flaunt their love everywhere when they get a chance to share.

For instance, Erika posted a picture of two on Valentine's day on February 15 on Instagram. She captioned on the post: Good angles only for V Day. Love you, my silly sweet man; remember when you said you’d get 27 weeks of allergy shots for our future dog? And then you actually DID IT? You’re the best.

Furthermore, Henningsen and Kyle worked together at the Second Stage Theater in Stephen Sondheim's Saturday Night as part of the weekly concert series "Musical Mondays" in March 2019.

How much Net Worth does Erika Henningsen Hold? Earnings

Working as an actress and singer, Erika Henningsen has amassed a good amount of fortune. As of early 2020, she has an estimated net worth $1 Million through out her significant roles in movies and TV series. Likewise, she serves as an artist partner, courses and conducts workshops and is associated with Single For Hope, a charitable organization located in NYC.

Starting in 2017, Henningsen appeared as Cady Heron in the Broadway musical Tony Award-nominated, Mean Girls, written by Tina Fey with music and lyrics by Jeff Richmond and Nell Benjamin, respectively. Whereas Fey holds $65 million worth as of now.

And in the U.S., an actor takes home a $600,000 total remuneration a year. Therefore, looking at her career graph, she can receive the same salary annually enough to lead a life in a luxurious lifestyle. Some of her Broadway shows include Hairspray, Diner, Les Miserables, Dear World, Mamma Mia, Flying Over Sunset and among others