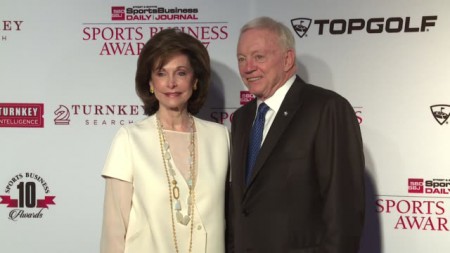 Unlike her husband Jerry Jones, Eugenia Jones is quite a reserved woman. Mrs. Jones is a social activist and involved in charity to help people in need. The power couple met via a blind date, and since then, their love has never grown apart.

The 77-year-old multi-billionaire business personality and his muse have set the standard for all the married couples out there. Are you curious to know more about their married life? If yes, then read along.

The Couple First Met in College

Mrs. Jones first heard about Jerry via her friends who spoke very heavily about him, all the right things, though. After hearing so many good things about Jerry, Eugenia can't stop herself to went on a date with him set up by her friends.

Jerry played football during that time and also served as the captain of the University of Arkansas football team. On the other side, Mrs. Jones was just a normal college girl.

The couple went on a group date along with their friends, which plays a vital role in their love story. Later, on the night, Jerry brought her a teddy bear, which he did not manage to win during a state fair for her. Afterward, their romances bloomed, and they became inseparable.

Eugenia and Jerry exchanged wedding vows on January 19, 1963, in a private ceremony. They married after three years of graduating from college.

The information regarding their wedding ceremony never made any headlines at that time because the media wasn't so widespread. However, it assumed some of their closed college friends and family members attended their big day.

Finding Success after the Marriage

Jerry was struggling in his business when he was married to Eugenia. But after some failed business, he joined his father's insurance company and went on to do an MBA in 1970.

After that, with years of hard work and support from his lovely wife, Jerry found his foot in the business world. According to Forbes, he currently owns $8.4 billion in his net worth. On the other hand, Eugenia also made her mark by engaging herself in charity works.

With interest in social work from a young age, Mrs. Jones donated to a trust fund to support needy medical students. Her philanthropic work and dedication towards making the earth a beautiful place has garnered much respect and admiration from the people around the globe.

In the couple's over five decades of marital relationship, they have successfully managed to raise three kids. All three of his children are currently serving in a higher position in Dallas Cowboys football team owned by their father.

Stephen Jones is the eldest child of the couple who was born on June 21, 1964. He currently heads the Cowboys' operations as Chief Operating Officer. Similarly, Charlotte Jones, the only daughter of the pair, serves as the executive vice president and chief brand officer. She was born on July 26, 1966.

Among the three offsprings, Jerry Jones Jr. is the youngest one who was born on September 27, 1969. The 50-year-old is the chief of sales and marketing for the Dallas Cowboys. Jerry is keeping a family affair in his business with his three children getting involved.

In 2014, a viral pic was leaked via twitter, which stirred up controversy for Jerry. Because of this, the happy marital life of Jerry and Eugenia was in trouble, as reported by the online tabloids. In the picture, Jerry was spotted with two younger girls who later identified as strippers.

Jerry broke his silence on the matter and said that the third party misrepresents the picture for extortion. During this hard phase, Eugenia supported her hubby, and now five years in the news, the pair is still together.

As part of respect and love for his wife, recently, in 2019, Jerry bought a yacht and named her Bravo Eugenia. The Yacht costs around $250 million for the billionaire businessman and goes in the collection of his other expensive toys.