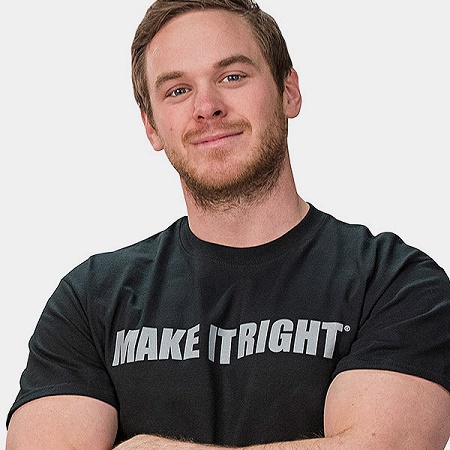 Mike Holmes Jr. (MJ) is an American celebrity child who has gained fame since his birth as the youngest child of Mike Holmes and his divorced wife, Alexandra Lorex. His father is recognized as the famous Canadian builder/contractor, investor, television host, philanthropist, and businessman.

Now, Holmes Jr. has established himself as a professional television host and contractor. Likewise, he started working closely with his father at the age of 14 and since then been working with his father. Currently, he's working on a new season of Holmes on Homes for HGTV Canada.

Scroll down to find out more about him in the parts below.

Mike Holmes Jr. is a happily married man. He tied the knot with his long term girlfriend, Lisa Grant. She is an herbalist and holistic health coach, as per some sources.

They walked down the wedding aisle on August 14, 2017, at an intimate ceremony in the Blue Mountain area of Ontario. 120 guests including close relatives and friends (including some fellow HGTV Canada stars!) attended their big day.

For their Indoor garden ceremony, the groom wore a dapper Hugo Boss tuxedo while the stunning bride wore a white wedding gown. Lisa's grandma, Teri Scallon, formally officiated their big day. To make their ceremony more enjoyable, the newlyweds had their first dance to the song Bloom by the Paper Kites.

Everything went perfect. Since the day, the married duo is now happily living their married life for over three years.

During a trip to Ottawa in 2016 on Sunday night at Restaurant 18, Mike's Youngest Son Mike Jr. proposed his long-term lover Grant. And the romantic proposal which was shared with viewers during an episode of Holmes & Holmes surprised Lisa.

Holmes, the television host, and Lisa are reportedly girlfriend and boyfriend from their teen years. They were apart for a long time, though, before later reuniting. The pair first began dating in 2006 and dated about three months before finishing high school.

The next time they faced, it was in October 2013. The same love feelings were still there, and so they began it all again.

His Parents Married Life and Divorce

Alexandra and Mike were once a married couple. After dating for a very long time the childhood sweethearts got hitched in 1982. Mike was very young during the union, at just 19 years old.

After four years of marriage, the exes welcomed their first child, daughter Amanda. The duo later once again welcomed two more kids; son Mike Holmes Jr. and daughter Sherry.  But Mike has had to go through a tragic time in the 1990s. His father Jim died in an accident when his mother suffered a heart attack and his business went bankrupt.

Also, Lorex and Investor divorced at around the same time. Lorex now keeps a shallow primary profile since divorced and has never opened up much about her.

His Dad, Mike's Love Romance with his Girlfriend, Anna Zapia

As of now, the 56 years old Mike is not married. But he is in a longterm relationship with his girlfriend Anna Zapia, whom he often mentions as his supportive wife.

The lovebirds have been enjoying their love life together for nearly two decades. The TV personality now frequently attends social events with Anna, as well as red-carpet events. But officially, they have not yet become a married couple. Now they live together in Halton Hills, Ontario, Canada.

His Two Older Sisters are Married

His oldest sister, Amanda Holmes, who was born in 1984, was once married to Adam Belanger, a machinery expert. But they did have a divorce. She reportedly remarried after the seperation but her second hubby's identity is still kept under wraps.

His next sister, Sherry Holmes got engaged to Blake Steed, one of her father's crew members. On 13th December 2018, they tied the knot. During their wedding, the bride was pregnant for several months. Later soon the couple gave birth to a baby daughter, Cali Kay Holmes Steed, on 22 April 2019.