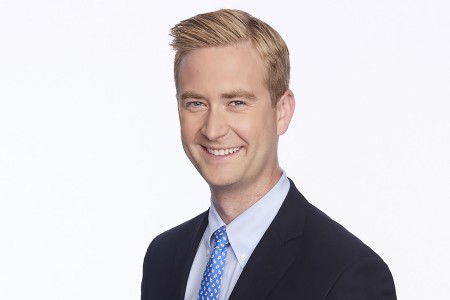 Peter Doocy has no limits to accomplishing what he chooses to finish, except the maximum he fulfills his goals, he places himself on the realization that it is worthwhile predetermining his personal goals. So, Doocy is on the right way of finding what's his real passion for becoming a prominent news reporter.

The citizen of the United States, Doocy hails from Irish descent because his paternal great-grandfather was a native of Ireland. If you love to explore more about Doocy's personal life, read the article to the end.

When it comes to the 32-year-old reporter, Doocy's personal life, he isn't committed to a marital relationship until now. Despite this, his fans are curious to know when and whom he will exchange his wedding vows? Well, he keeps himself out of the closet and proclaimed to be single as of now.

Fox News general assignment reporter, Peter is currently focusing on journalism while maintaining his name of the top of his career. He is busy reporting the most significant news and interview with political personalities so that he has no time to get married yet.

Peter's parents, Kathy Doocy and Steve Doocy had their first meeting while working at a new station, WRC-TV, situated in Washington, D.C. At that time, Steve was an intern, and Kathy was giving some advice on how to be perfect in his reporting work.

Following this, the duo became good friends and created strong chemistry. More to this, they took their friendship a step forward after finding themselves they are made for each other.

The dating partners got engaged after dating for several years. They then walked down the aisle in a small and private ceremony on 30th January 1986. Since then, they're together for 34 years in their joyful marital union.

Grew up with Two Younger Sisters

American correspondent, Peter spent his childhood with his two younger siblings, Mary Doocy and Sally Doocy. He and his sisters were raised in a Roman Catholic faith while going to church every Sunday when they were kids.

On the other hand, Doocy's sisters have also made their appearance in the Fox News programs while he was reporting live. They also featured in an episode of Fox and Friends in 2017, where their father, Steve is currently co-hosting with other notable news presenters like Aishah Hasnie.

Peter's Father Is His Best Friend

American news reporters, Peter and his dad, Steve are best friends despite their father-son relationship. Most people say they're actually brothers when they appear on Fox & Friends. In an interview, "It'll be like, no, he's my son. He's 30 years younger, Thank you, I'm flattered, but he's my son."

When Peter just pursued the Fox News, his father, Steve gave him the best advice on the very first day of his work. He advised him to put his jacket off and roll up his shirt sleeves while entering the newsroom. It gives a positive impression on other people how busy he is working.