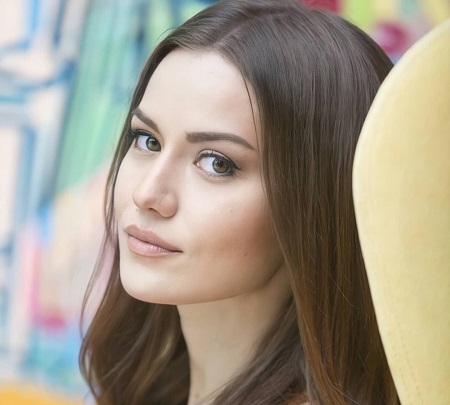 Fahriye Evcen is a German-Turkish actress who is best known for starring as Feride on Resat Nuri Guntekin's novel based TV series, Calıkusu. Moreover, she played the leading character of Necla Tekin in TV series, Yaprak Dokumu from 2006 to 2010.

Along with TV series, she has also made appearances in movies like as Pinar in Aak Tutulması, and as Young Signora Enrica in Signora Enrica. Today let's grab more information about her in the following sections.

Who is Fahriye Evcen Husband?

The 34 years old Fahriye Evcen is a married woman. She has been living a happy and healthy marital life with her love of life, Burak Ozcivit, 35, for two years.

Evcen first met her husband Ozcivit during the shoot of the Turkish Drama Wren (Calikusu). They began dating in around 2013 and has been together since then. That means now they have cherished their seven years of togetherness.

Dating for around four years, the couple became an engaged couple 9 March 2017 in Germany. Finally, they dedicated to enhancing their relationship into the next door and married on 29 June 2017.

On their big day, both the bride and groom looked incredible perfect. The newlyweds say "I do" at the Said Halim Pasha Mansion in Istanbul in the presence of 500 guests.

Fahriye wore gowns with long sleeves made of French embroidered lace and special fabric. She wore not one, but two outfits and both dresses suited her skin tone perfectly. Burak wore a black tuxedo, made of silk and handmade.

Turkish actress Evcen and her husband, Ozcivit are doting parents of one baby boy. After two years of nuptials, they welcomed their firstborn child Karan Ozcivit to the world on 13 April 2019.

But during that period the couple kept the pictures of their baby away from the social media. The actress finally shared adorable images of herself posing with her infant baby on her Instagram page on December 15, 2019.

Now, he stars as Osman Bey in TV series, Kuruluş: Osman in 2019. In 2003, Ozcivit became Turkey's top model. He began working with different model agencies from then on.

Working in the TV industry since 2005, Fahriye has successfully achieved a huge amount of fortune. As of 2020, her net worth is estimated to more than $1 Million. Hande Ercel is another Turkish actress with an estimated net worth of more than $2 Million.

Turkish actors are now paying six-figure salaries and episodes, cost up to $800,000 as per Variety.com. Well, Evcen's been in the media for 15 years, so she may be in the same category. Besides, she would make a fair amount by her presence in commercials and endorsements.

Evcen has three siblings named Aysen Evcen, Demet Evcen, and Nese Evcen. As per her education, she studied at Bogazici University and Heinrich Heine University Dusseldorf.