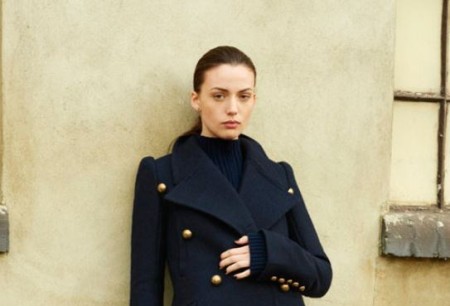 When Peaky Blinders, a British period crime series aired on BBC, it took all the expectations of the viewers right away. And Dutch actress, Gaite Jansen was among the show's lead casts, who played Duchess Tatiana Petrovna in season three. She is one of the most promising young acting talents of her generation.

The 28-year-old lovely actress was born on December 25, 1991, in Rotterdam, the Netherlands, as Gaite Sara Kim Jansen. Moreover, she holds Dutch citizenship while she received her professional training at the Maastricht Academy of Dramatic Arts.

Gaite Jansen's Boyfriend is a Filmmaker

The star who received the Best Actress Award at the 48 Hour Film Project in Amsterdam for her role in Luwte is in a lovey-dovey love relationship with her boyfriend, Mees Peijnenburg. By profession, he is a filmmaker whose notable works include Iconoclast, Halal, and Blue Thunder.

As per one Instagram post from Jansen, this lovely couple seems to be dating each other since 2015. Nonetheless, with her sweetheart, Mess, the actress posted an image on social for the first time on April 25, 2019, with the caption "being four years in the clouds. He posted a smiling picture alongside Gaite with love emoji on July 19, 2016.

Not only she but her boyfriend, Peijnenburg's Instagram, is full of Gaite's pictures and beautiful moments. The couple can be seen sharing lots of adorable pictures on their social media.

Hence, Gaite shares a strong love affection with her love of life, Mees Peijnenburg, for around five years. Besides this, there is no news about her past love affair with the media.

How much is Gaite Jansen's Net Worth?

One of the famous actresses, Gaite Jansen, has made a substantial amount of money throughout her acting career. As of 2020, she enjoys an estimated net worth of $1 Million. The primary source of her income comes from her job as a television and film star.

During her acting gigs, Jansen has worked on various shows, including Line of Duty, Hollands Hoop, Jett (TV series), and among others. Thus, for her roles, she might earn a salary of £20,347 or $26,550, which is an estimated salary of British actress/actor. Besides a TV career, she earns additional money from many commercial campaigns like 'BEEB.'

Peaky Blinders is a British period crime drama produced by Steven Knight. The series, set in Birmingham, England, announced it would take a total of seven shows to complete the story up to that point.

The show is considered as one of the greatest BBC One's series, which features an ensemble cast such as Helen McCrory, and Cillian Murphy, among others.

Previously, the fifth season aired on September 22, 2019, and the Netherlands born actress has already portrayed the role of Grand Duchess Tatiana Petrovna, a Russian princess in season 3.

Further to that, her other appearances include Hana Raznikova in Line of Duty, as Phoenix in Jett, as Ophelia in Hamlet vs. Hamlet, and In My Father's Garden (2016).