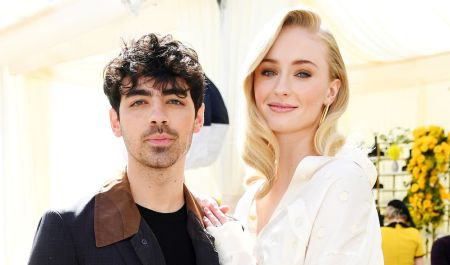 Primetime Emmy Award-nominated actress, Sophie Turner is expecting her first baby with her beloved husband, Joe Jonas. The announcement of their first child was found after the Game of Thrones star, Sophie came out to be pregnant on February 14, 2020, on Wednesday.

Multiple media tabloids said, "The couple is keeping things very hush but their friends and family are super excited for them." During the 62nd Annual Grammy Award ceremony, Sophie arrived with her husband, Jonas while wearing loose outfits on and off the red carpet.

So, this means Sophie is making herself comfortable wearing loose clothes due to her changing body. Apart from this, the couple's fans wished them for their upcoming child via Twitter, including one official account of Black Girl Nerds, said to them,

"Sophie Turner and Joe Jonas are expecting their first child. The Queen in the North will soon have the prince (or princess) that was promised!"

In the previous year, Sophie and her partner, Joe exchanged their wedding vows at A Little White Wedding Chapel in Las Vegas, Nevada on May 1, 2019. They also tied the knot in the South of France on June 29, 2019. At both wedding ceremonies, Joe's brother, Nick Jonas and Kevin Jonas served as groomsmen.

As per the sources, Joe and Sophie became the uncle and aunt of Valentina Angelina Jonas (born in 2014), and Alena Rose Jonas (born in 2017), who was born to Joe's big brother, Kevin Jonas, and sister-in-law, Danielle Jonas.

Additionally, Joe's younger brother, Nick Jonas and Priyanka Chopra are also on the list of welcoming their future children.

If You're Fond Of Reading News, Then Visit Married Celeb For Diversifying News About Celebrities Day-To-Day Lifestyle!!!