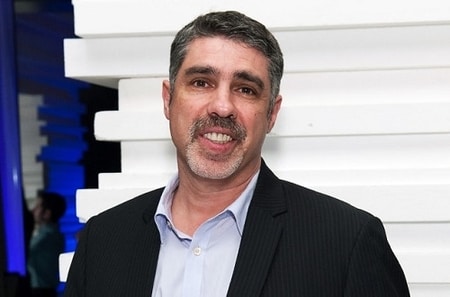 Known by the nickname Baba Booey, Gary Dell'Abate is one of the all-time influential American radio producers. He is best known for serving as the executive producer of The Howard Stern Show since September 4, 1984. Gary is also a co-host of Sirius XM Radio's The Wrap-Up Show.

Gаrу Раtrісk Аngеlо Dеll’Аbаtе was born in Brooklyn, New York, the United States on Маrсh 14, 1961. His mother, Ellen, was a food demonstrator at Macy's in New York City while father Salvatore Dell'Abate was a Häagen-Dazs ice cream salesman. He is an American citizen and an Italian-American ethnic background.

Аdеlрhі Unіvеrѕіtу's graduated, Dell'Abate, is happily married to his long term partner Mary Dell'Abate ( birth-name Mary Caracciolo) for nearly two decades. They walked the wedding aisle in the presence of family and friends on July 3, 1992.

59, the radio personality admitted that his wife, Mary is a few inches taller than him. And at their wedding, the bride looked towered over him because of heels. The husband and wife seem to be in very much with each other since the day.

Yes, the married couple has two sons named Jackson Dell'Abate and Lucas Dell'Abate to make their marital life more enjoyable. Jackson was born on October 27, 1994, as the first-born or elder-one child, while Lucas was born on December 7, 1997, as a second or youngest son.

Meanwhile, the older Dell'Abate, 25, graduated from Syracuse University on May 15, 2016, and earned his degree in Public Communications from the Newhouse College. On the other hand, Lucas is a DJ and musician who started his early career when he was 13.

As of early April 2020, Gary Dellabate, an American radio producer, has a net worth of $15 million. He made this fortune as The Howard Stern Show's executive producer and as a Sirius XM Radio broadcast.

Gary started performing his show publicly in 1984 initially after being introduced to the Howard Stern Show. He's booked many famous superstars as a producer for his shows including Demi Moore, and Jerry Seinfeld.

After his brother Steven died of AIDS in January 1991, Radio producer joined the music industry LIFE-beat which fights AIDS. His autobiography, They Call Me Baba Booey (released on 2 November 2010), also debuted in November 2010 at # 6 on the NY Times Best Seller list.

Dell'Abate in the book reveals the story of the death of his brother from AIDS. He also talks of his mother's battle with depression and his rise to The Howard Stern Show's executive producer.