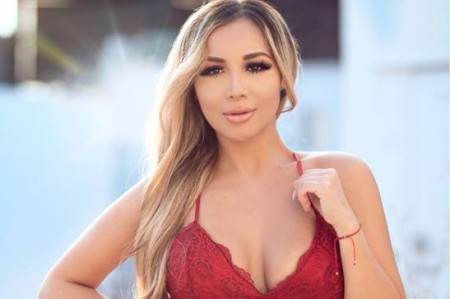 Gisselle Bravo is a Mexican-American radio and television personality best known for her work in radio as the co-host of Don Cheto Al Aire's morning show. Also, she is the host of an entertainment gossip show on Estrella TV, a leading Spanish-language broadcasting network in the U.S.

Bravo began her broadcasting career at Fox Deportes. She joined EstrellaTV as a national weather anchor in 2016. Besides, she is a model, and in 2012, she won the title of Miss Nuestra Belleza Jalisco USA.

Talking about Bravo's personal life, the stunning beauty is living a single life. She isn't dating anyone at the moment, so Gisselle doesn't have a boyfriend. Also, the reporter is yet to be married. She might have been in a few relationships before, but Bravo hasn't shared any details.

In 2010, Bravo raised a lot of eyebrows when she told that her boyfriend was Javier Hernandez, football player of Mexican National team. Later, she revealed the news as just a playful joke. Like Bravo, another Estrella tv reporter, Janice Villagran is single but has a child from her previous relationship.

Gisselle is probably focused on her professional career. Apart from television, she works as a model. She spends her leisure time travelling and enjoying with friends. Despite being a single woman, Bravo enjoys her singlehood and independence. She likes boxing, salsa, and ballet.

The Estrella TV's reporter, Gisselle Bravo, earns a pretty good amount from her multi-professions. She surely has amassed a decent net worth out of her successful career. There is no exact information about her personal wealth, but Bravo's net worth as of 2020 might be around $800,000 similar to Tsi-Tsi-Ki Felix.

Currently, Bravo is the radio host of Don Cheto's morning show. Similarly, she also hosts an entertainment gossip show. The average salary of a radio host is around $46,323, while reporters earnings range somewhere between $38,943-$87,323.

As mentioned, Bravo is a model and a social media star as well. She has got a few endorsements deals and paid sponsorships. The host has partnered with some of the popular make-up, clothing, and fitness brands which adds a certain income in her bank balance. She has modelled for different brands like Fashion Nova, House of Fashion, among others.

Dafne Gisselle Bravo was born on May 15, in Guadalajara, Mexico. However, she hasn't revealed her actual birth-year, so her age is unknown. By assumption, Bravo might be in her early 30s.

At 8, Gisselle moved to California, United States with her family. Further, she has a brother as well. Before jumping into journalism, she worked as a model. In 2012, she won the South California Mexican pageant title, Miss Nuestra Belleza Jalisco USA, and Miss Nuestra Cultura.