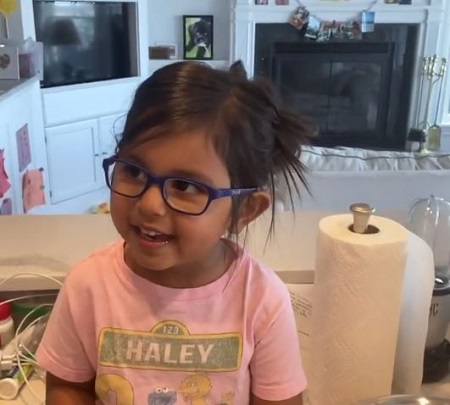 People who are born with a silver spoon in their mouth gets privilege in their life. Some take their life for granted, while some struggle to make a name of their own. Haley Joy Kotb is one of those celebrity children who achieved worldwide fame just after her birth.

She is known as the adoptive daughter of American-Egyptian broadcaster Hoda Kotb and her fiancee, Joel Schiffman. Hoda currently works for the NBC News morning show Today as a main co-anchor. Today let's talk more about Haley in the following sections.

Welcomes a Little Sister in 2019

Aged, 3, Haley became the big sister when her parents Hoda and Joel welcomed another adopted daughter together. On April 16, 2019, The Today show announced the birth of her second child, Hope Catherine Kotb, through their Tuesday’s episode on Today.

"Some very happy news from our Hoda– she’s adopted another baby girl! And she has the sweetest name", they Twitted. Similarly, the media outlet posted Kotb's picture holding her new addition along with her older girl Haley with a big smile on her face.

When Haley Kotb was Adopted?

Kotb said that she first raised the idea of adoption after believing that parenthood would never be on the cards of her. So she said her long term partner Joel she wanted to pursue adoption with him. Joyfully he agreed with her decisions and then adopted Haley.

Since then, the parents of two have shared dozens of photos of her as proud parents and has been radiating happiness together. Recently in 2020, Haley celebrates her 3rd birthday where her mother Hoda shared a sweet tribute on Instagram with a trio of adorable images.

She wrote: "I believe in miracles. My first one happened 3 years ago".

56, Hoda and 62, Schiffman has been sparkling their love relationship since 2013. That means it's been almost six years.

The lovebirds first met at an event for Wall Street professionals in the summer of 2013. After six years of together, they finally became an engaged couple on November 25, 2019.

The financier Joel popped down to one sandy knee during a Mexico vacation and said: "Would you be my wife?". Hoda said that she was totally shocked and he has a good poker face on her Today show, adding "My heart has literally been pounding."

So any plans for marriage? Prior to the pandemic, the couple was planning on tying the knot in a destination wedding in Mexico. The TODAY co-anchor said on People that she and Joel: “We haven’t thought about it too much, but we might do something like that. The place is special to us.”

Before Schiffman, the 1.75 m tall broadcaster was previously married to her now estranged husband, Burzis Kanga in 2005. He is a retired University of New Orleans tennis coach.

The couple first met at a single’s event on Valentine’s Day in the early 2000s. But they ended their relationship in 2008 after being together for around three years. Like Kotb, the University of California's graduated Joel was also married once.

Her mother, Hoda Kotb has an whopping net worth of $30 million according to Celebrity Networth. She has gathered her total wealth throughout her broadcasting career as a news anchor and host.

She makes salary between $8 million and $10 million a year for working on NBC's news morning show, Today. She was replaced by  Matt Lauer, who worked from the show from 1997 to 2017.

On the other hand, her father, Joel Schiffman is an financier who currently works as a director and a vice president of the financial group. His net worth is estimated at $19 million. Further, he serves for National Accounts at Columbia Management as a as a Senior Relationship Manager.