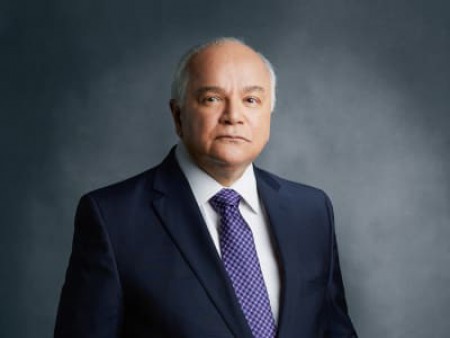 Hampton has extensively reported on the Microsoft anti-trust trial. Additionally, he provided the first live reports of the Capitol Hill shooting of two police officers and had in-depth coverage of the nationwide United Parcel Service strike. Despite being a renown media personality, Hampton has kept his personal life under the radar.

Pearson's Personal Life Is A Mystery To Solve

There is no doubt that media personalities are in front of the camera always; hence, it should be easier to access their personal life. However, when it comes to Hampton, he is so secretive that not a single thing is known about his relationship status.

Up to date, Pearson hasn't revealed anything about his married life. Therefore, it is not known if he has tied the wedding knot or not. However, some source claims that he is married and has a family. On his social account, there isn't a single picture of his wife or his family.

Pearson, who might be in his late 60s, may have had few affairs in the past. But again, it is unsure because Hampton has kept all the details behind the curtains. He is probably living with his family as of now.

Since 1995, the Washington based CNBC correspondent has covered extensively on the Microsoft anti-trust trial. His primary focus was covering the economic, financial, and political news from the nation's capital.

CNBC viewers watched Hampton regularly on the White House, Congress, the Federal Reserve, and a host of legislative and regulatory issues of primary concern.

A long time before TV cameras were allowed inside the Federal Reserve, Hampton spent years in the basement of the Treasury Department to report on the interest rate moves via telephone.

Before CNBC, Pearson worked at then-NBC affiliate WBZ in Boston. During the initial phase of his career, Pearson was a reporter/producer for the Washington bureau of CBS News and reporter/bureau chief for KRON-Tv, San Francisco.

Pearson has also worked as a weekend anchor in Milwaukee and San Francisco. Since 1976, he has been reporting major news events besides campaigns, inaugurations, and summit meetings.

Retirement After 23 Years At CNBC

Around the end of May, in 2018, Hampton announced his retirement from CNBC. Upon hearing his retirement news, Hampton's colleague, Eamon Javers, praised his reporting as a class act. As well as, Mr. John Harwood shared a picture on his Twitter with praising Pearson.

YouTube: Hampton breaks down the latest employment data from the Labor Department!

CNBC chairman, Mark Hoffman and svp and editor in chief of Business News Nik Deogun stated via email applauding the work of Hampton over the past 23 years at CNBC.

In 1984, Hampton won a local Emmy Award for Best News Feature, and at the time, he as a reporter/producer for CBS News and KRON-TV.

Image: Hampton is one of the prominent former reporters who worked for 23 years at CNBC.
Source: everpedia

Moreover, in 2004, Pearson was nominated for a Business News Emmy Award by the National Academy of Television Arts and Sciences, for a series of reports on medical device technology.

The former CNBC Washington reporter, Mr. Hampton Pearson, has a net worth of $1 million as of 2019. The source of his earnings came from his long-time association with the global leading business network, CNBC.

One of the most prominent and respected journalists, Pearson's annual salary at CNBC, was over $121,230 per year. On average, his yearly income was roughly around $150,000. Now Pearson is retired; he spends his time happily relaxing with his family.