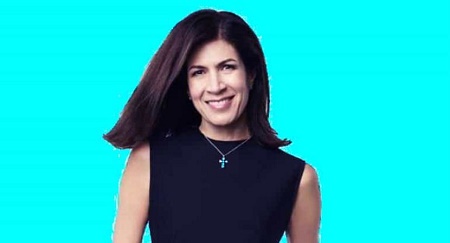 Have you ever watched the American show Trading Spaces in the Discovery Home channel? Then, Hildi Santo-Tomas is not a stranger to you. She is a popular interior designer and reality TV personality in the United States.

Hildi Santo-Tomas was born on 4th April 1961 as Hilda Maria Santo-Tomas in North Carolina, the USA. As of 2019, she is 58 years of age. Born to Cuban parents in America, Tomas has American citizenship and belongs to mixed ethnicity.

Hildi Santo-Tomas from Trading Spaces has done the best in her personal life just like her work life. Just like Bridgid Coulter, she is also happily married to her longtime husband, Etienne Fougeron.

Her partner, Etienne is from France and is artist by profession that makes both of them passionate about art. He owns an art gallery in Paris, France.

Hildi and Fougeron tied the romantic wedding knot in June 2002. Their wedlock ceremony was attended by some friends and family members. The couple keeps their relationship a secret; so under wraps that there are hardly pictures of them together.

Trading Spaces star and her husband Etienne has been in a matrimonial relationship for eighteen years, however, they do not have any children.

If we stalk her Instagram profile, there are no images of this beautiful couple. Nonetheless, with the activities she displays on her profile, we can see her whole post is full of traveling different places as she has also mentioned on her bio that she is an avid explorer.

Hildi Santo-Tomas is an American designer and TV star who has a net worth of $300,000 as of 2020. Working for over a decade in designing field, she has contributed a lot to the design industry making significant earnings from large projects.

Santo Tomas' annual salary is estimated to be around $70,000. Also, she has been making a reasonable amount of money from the television appearances for the years the show, Trading Spaces.

American designer, Santo-Tomas earned her higher education at the University of North Carolina at Chapel Hill in industrial relations and economics.

Hildi came to fame for appearing in the one-hour-long American reality TV series, Trading Spaces that aired from 2000 to 2008. This built her maiden name, Trading Spaces Hildi Santo-Tomas.

Well, Trading spaces is a famous show which first aired in 2000 to 2008  on TLC and Discovery Home and then there was a second revival from 2018.

The show includes a host, homeowners, carpenters, and designers. In the first run, Hildi Santo-Tomas was a designer but fellow developers refer to her as the ' hay room designer ' because she once decorated the space of a client with hay after her colleagues argued against it.

It took another 17 hours to remove the hay that the show's manufacturers compensated for. And she came back in the second run in 2018.

In addition, Hildi also appeared as a contestant on the TV series, Pyramid in 2003.