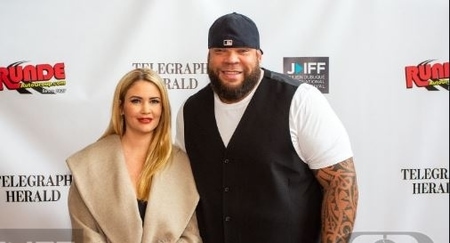 As the waist size is decreasing, the business for Ingrid Rinck is increasing. The creator of Sensible Meals has found success in her professional life, which can be suggested with her Professional Woman Awards. As much as she values hard work in business, she keeps her family on top of her priority.

The Entrepreneur works for around 15 to 18 hours a day. Maybe because of that, not much is known about her personal life. If you want to know her life, especially her relationship status, then read along. In the article, we're going to explore more about her family.

Her Boyfriend Is A Wrestler

Ingrid is a big name in the fitness industry. Her nutritious diet plan has helped many people to get in shape, but her fame skyrocketed after she started dating WWE wrestler George Murdoch A.K.A. Tyrus.

Neither Ingrid nor Tyrus have confirmed anything about their relationship. But scrolling through Rinck's Instagram, it can be assumed that the pair are dating for some time now.

Many of their fans want to see the lovebirds tie the knot. Their big day can come anytime soon, but so far, the pair has not commented anything about their plans for the wedding.

She Is A Mom Of Three

In an interview once, Ingrid talked about her journey in creating Sensible Meals. There she mentioned her three kids. Not just that, on her Instagram account, she has said about being a mother of three kids, Rhett, Rock, and Georgie.

Rinck, however, has not disclosed much about her brood. Ingrid was married once, and after the divorce, she started running her training business and also raising three children as a single mother.

Together with Tyrus, Rinck gave birth to a child; however, the couple has not disclosed much about the kid. Moreover, Tyrus also has a kid from his previous relationship, making Ingrid step-mother. In addition, she often uploads her children's pictures on her social media, displaying her love for them.

Her Son Inspired Her to Start The Business

In her Interview, the businesswoman talked about how her 8-year-old son Rock inspired her to start Sensible Meals. Rock suffered from Type 1 diabetes, which changed her as a person.

Ingrid then started preparing healthy meals for her son and also changed the diet of her family. In no time, she could feel the difference, and so did her friends and clients. They started asking Rinck to prepare a similar diet plan for them, too, which helped her to kick start her business.

Initially, her father, who previously owned the restaurant, helped her in preparing meals. Back then, some critics criticize her as she was a college dropout and did not have a degree.

But with perseverance and hard work, Ingrid successfully established her business. Currently, she employees over 1,200 employees working round the clock. Besides that, her winning of Professional Woman awards also helped her gain respect from business critics.