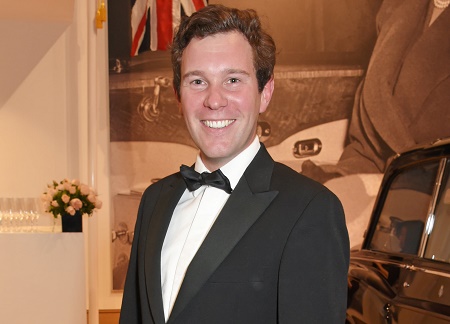 Jack Brooksbank is a famous British wine merchant and brand ambassador who works for George Clooney and Rande Gerber's Casamigos tequila as a U.K. ambassador. However, he is widely known as the husband of a member of the British royal family, Princess Eugenie, who is the granddaughter of Queen Elizabeth II, 94, and Prince Philip, Duke of Edinburgh, 98.

Jack Christopher Stamp Brooksbank was born on 3 May 1986 at St Thomas' Hospital in Lambeth, London. He is the eldest son of Nicola Brooksbank and George Edward Hugh Brooksbank, a company director, and chartered accountant. His grandparents are Stamp Godfrey Brooksbank, Michael Anthony Fendall Newton, Joanna K. H. Holland, and Celia Dorothy Coke. Further, he is the oldest brother of Thomas Brooksbank.

34, Jack marries Princess, 30, in the autumn of 12 October 2018, at St George's Chapel in Windsor Castle, UK. In reality, after Princess Anne and Mark Phillips' wedding 45 years earlier, Eugenie had been the British princess of the royal blood to marry in the Church of England.

For their big day, the beautiful bride dressed in an "open-back" long-sleeved ivory dress with folded shoulders designed by Peter Pilotto and Christopher de Vos. The bride also wore a pair of diamond and emerald earrings, Brooksbank gifted to her. A total of six bridesmaids and two-page boys were chosen.

The Royal wedding function was attended by approximately 850 guests. Also, commemorative gift bags were given to the 1,200 members of the public invited to a wedding at Windsor Castle. And the cost of their wedding is estimated at £2 million, which was officiated by Dean of Windsor, and David Conner.

Hosting by Eamonn Holmes and Ruth Langsford, their royal marriage function was shown on ITV's This Morning. And the wedding coverage on ITV watched 3 million people. since their wedding, the  Court Circular has used the "Princess Eugenie, Mrs. Jack Brooksbank" theme.

The newlywed's couple, Jack and Princess first met while vacationing in Switzerland, at the Swiss ski resort of Verbier where their friends introduced them. " We met when I was 20 and Jack was 24 and fell in love," Eugenie said BBC,  "We have the same passions and drive for life."

After dating for several years, they announced their engagement earlier in January 2018. In Nicaragua, they were engaged with Brooksbank giving his fiance Princess an oval-cut Padparadscha sapphire covered by a diamond halo set on a gold band with two more diamonds on the shoulders.

The ring holds a striking similarity to the Princess mother, Sarah's engagement ring. The approximate value of the ring varies between $30,000 and $150,000.

What is Jack Brooksbank Net Worth?

Jack is making a heavy amount of money working as a brand ambassador for Casamigos tequila. He also founded Jack Brooksbank Ltd., with the worth of $18,000. Today, his exact net worth remains mysterious to the general public. Meanwhile,  her wife, Princess Eugenie, who is a member of the British royal family, has a staggering $10 million net worth.

On the other hand, Princess's grandmother Elizabeth II's total net assets are estimated to be £360 million, making her the 329th richest person in the United Kingdom. While her granddad Prince Philip's total asset is said to be worth around $30 Million.

Forbes estimates the total British empire worth about $88 billion, or £72.5 billion. Most of all, the wealth of the British royal family comes from their inherited lands, investments.

Stay Updated With Marrieceleb To Know More About Celebrity Weddings!!!!