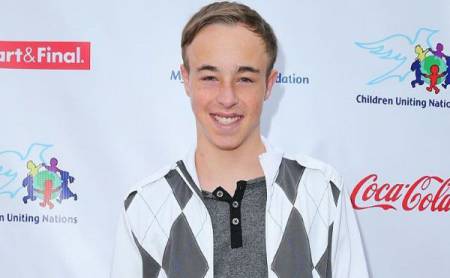 The award-winning actor, Jae Head is best known for portraying the role of Sean Junior Tuohy, in the 2009 film, 'The Blind Side.'  Head rose to fame after playing the character of Bo Miller on the TV series, 'Friday Night Lights.'

Some of his acting credits include the 2008 superhero film, 'Hancock,' CBS' sitcom, 'How I Met Your Mother,' and crime drama series, 'Law & Order: Special Victims Unit.'

Who is Jae Head?

The talented actor, Jae Head was born on December 27, 1996, in Hamlin, Texas, the U.S. to parents Jeffrey and Jo Head. As of 2019, he is 22-year-old and his birth sign is Capricorn. The star moreover grew up alongside a sibling Jansen Head.

Do you know? At the time of his birth, Jae had no aorta which is the largest artery in the human body.

His blood vessels had to be adapted to replace the aorta temporarily. He had open-heart surgery at two months and again at 14 months. Eventually, his pulmonary vein was converted into an aorta over a three-year period.

Despite having critical health problems, Jae managed to overcome his physical limitations and now he is one of the rising young actors in Hollywood. Further, one of his favorite actors is Paul Schulze.

The actor further began acting from an early age and became a cast member of the 2009 film, 'The Blind Side.' He made his debut alongside famous actors Sandra Bullock and Tim McGraw.

Jae's major breakthrough role came out with the TV series, 'Friday Night Lights' where he portrayed the character of Bo Miller. Subsequently, Jae was cast in the 2008 superhero comedy film, 'Hancock.' The blockbuster movie starred famous actors such as Will Smith, Charlize Theron, and Jason Bateman.

Apart from movies, Head has also appeared in hit TV shows like, the CBS sitcom, 'How I Met Your Mother,' 'MADtv,' and 'Law & Order: Special Victims Unit.' Likewise, in 2018, he appeared in two films, 'Homeless Henry' and 'Depraved.' Currently, in 2019, he is set to appear in multiple projects.

Is Jae Head Dating Anyone? Know His Relationship Status!

The 22-year-old young actor from Texas, Jae Head is probably living a single life. So, one can wonder whether he has a girlfriend or not. He might have dated a few girls, but has kept to himself.

Also, he is not spotted with any girls in the public which raise questions on his relationship status.

Head in addition is extremely focused on building his professional career.

How Much Is Jae Head's Net Worth?

The Blind Side's star, Jae Head has a net worth of $2 Million, as of 2019. Head owes his fortune to his yielding professional acting career.

The average salary for actors ranges between $45,000-$120,000 per episode. Further, movie star charges a large amount of payroll. Hence, it can be said that Jae might earn in a similar manner.

The star is one of the few actors who began his career as a child artist and made a name for himself. One such young actor who resemblances Head's persona is Jack Messina.

Head further might earn around $52,000 annually from acting in movies/shows. Few of his movies which collected excellent revenue at the box-office are the 2008 film, Hancock collected over $624 Million at the Box office. While, the 2009 film, The Blind Side collected $309.2 Million.

Jae lives a lavish lifestyle and he knows how to spend his earnings. He owns a stunning Wrangler jeep for ride and a few luxury cars. Also, he has a beautiful house in Texas.

In his spare time, Jae visits exotic places for vacations with friends and relatives.

Jae Head stands at a decent height of 1.63 m (5 feet 4 inch) and has a bodyweight around 138 lbs. Further, he has blue eyes and light brown hair.