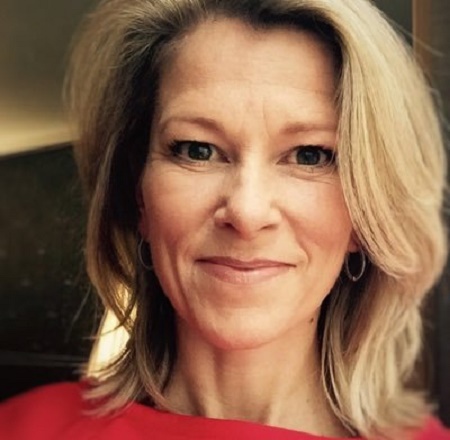 Janis Mackey Frayer is a Canadian journalist and NBC News correspondent, based in Beijing . Prior to this, she also worked as Asia Bureau Chief with CTV (Canadian Television).

Mackey Frayer was born on 27 May 1970 in Owen Sound, Ontario, Canada. She holds Canadian citizenship and is of white ethnicity. The details regarding her parental background, early life, siblings, etc are not available at the moment.  As of 2019, she is 49 years and is also celebrates her birthday on May 27.

After graduation, Frayer started her career at the age of 19 working for CFOS Radio in Owen Sound, Ontario. Since then, she has worked for several TV stations including  YTV, and BNN as financial and business news anchor. In addition, from 2003-2009 she was chief of the Middle East Bureau in Jerusalem and from the 2009-2013 chief of the South Asia Bureau in New Delhi.

Throughout her career, Mackey has own few awards including  Canadian Screen Award for Best Reportage for coverage of the 2014 war in the Gaza Strip, World Gold in the category of Human Interest, two Gemini Award nominations for Best Reportage and two RTNDA Awards for News.

Well, if you guys are this lovely and good-looking reporter's fan then you must be curious to know about her personal life whether she is married or not. Yes, Mackey Frayer is already a wedded woman just like her NBC colleague Dough Hitchner.

The man who brings happiness and smile in her life is none other than Kevin Frayer.

He husand Kevin is a renowned Canadian photojournalist best known for his Middle East wartime job in Gaza Strip, Afghanistan, and Lebanon.

Speaking of her marriage relationship with Kevin, she is very blessed having a life partner like him. Now, the couple lives a very low key marriage life but Janis always describes him as the most loving, wise and charming husband all over the world.

Furthermore, Mackey rarely shares pictures with her husband in her social sites including Instagram.

A mother of a child

Janis and Kevin are blessed with a child, a son from their long-time nuptial relationship. But the baby's name is not disclosed to the media.

However, one of Janis' friend tagged her in a photo where her husband can be seen touching her baby bump on 11 June 2013.

He captioned the photo.

Now, the family of three is living in the United States.

Financial and business news anchor, Janis Mackey Frayer has concealed the actual amount of her net worth, but it is assumed to be in million. Well, she is active in the broadcasting field for a long time decade as an anchor.

So, Mackey has made a good amount of fortune through her journalism career.

As of now, Mackey Frayer is currently working for NBC Nightly News as NBC News Correspondent and as well as TODAY show. With decades of experience, she has a reported annual salary of $100 to 149,999 per year.

Now, Mackey Frayer is living a very rich lifestyle in a luxurious way. Moreover, she has not disclosed her investment industry and as well as her estate and house.