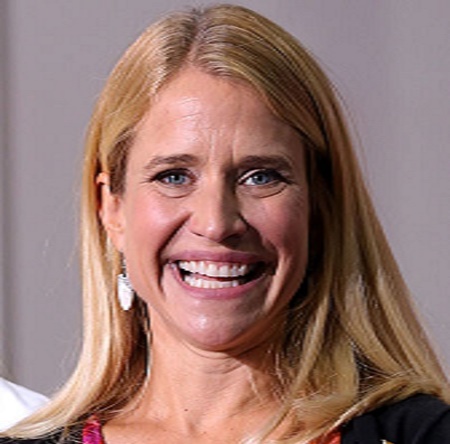 Janna Ryan is definitely an incredibly supportive political spouse of a former American politician, Paul Ryan. Before meeting to Paul, she was a famous tax attorney and corporate lobbyist who worked for PriceWaterhouseCooper and then for Williams & Jenson.

The celebrity wife was born in 1969 in Oklahoma, the USA as Janna Christine Little. But, she grew up to the Democratic Family alongside two sisters Dana and Molly; to father, Dan and mother, Prudence Little. For her education, she studied at Wellesley College and later she earned a law degree from George Washington University.

The beautiful woman exchanged the wedding vows at the age of 31 to the life partner, Paul Ryan, who is a year older than him. Their ceremony was held at Big St. Germain Lake in Wisconsin on December 2, 2000.

The duo who celebrated their twentieth anniversary of marriage had first met through their mutual friend, A. Mark Neuman, on the 30th birthday of Janna. It was a good match for them despite coming from different political backgrounds.

And the two clicked on their nature of passion, for example, fishing and hunting. Both shared their love life likewise for a year as a boyfriend and girlfriend. So for now, in Janesville, Wisconsin, one of Hollywood's happiest couple lives a happy life along with their three children.

From their conjugal life, the couple has one daughter, Elizabeth Anne and two sons, Charles Wilson, and Samuel Lowery. After giving birth to three babies, she decided to become a stay-at-home mother at the detriment of her job in Janesville, Wisconsin.

Henceforth, Janna absolutely loves being a mother and loves to keep her home far from politics. Meanwhile, when the father Paul is home, they concentrate on family, friends, culture, and the packers

As a Tax Attorney & Corporate Lobbyist

Before meeting Paul Janna had already had a good career. She began working as a tax lawyer and lobbyist for firms including PriceWaterhouseCooper and Williams & Jensen after completing her college education.

51, Janna then became a corporate lobbyist, representing some of the biggest cigarette, alcohol, and oil firms. She has also represented organizations such as the Blue Cross Blue Shield Association, the American Physical Therapy Association, America's Cigar Association, Marathon Oil and United Parcel Service.

She continued her career, until 2000 when she married Paul Ryan.

Janna is a Millionaire!

The family of Janna Ryan has close connections to the politics of Oklahoma. Nevertheless, the mother was named by the governor to be a founding member of the Oklahoma Ethics Commission and the Campaign Policy and Ethical Standards Committee of Oklahoma. More than that, her father David was the 21st governor of Oklahoma for four years.

Janna's inherited a trust fund worth between $1 million and $6.5 million after her mother died from cancer on the 22nd day of May 2010. Back in 2012, the cumulative assets calculated by the Ryans were $7.7 million, according to The New York Times.

Thus, most of the family’s wealth comes from Janna’s grandfather, Reuel Winfred Little.  He graduated from the University of Oklahoma Law School in 1927 with just $25 to his credit, according to the LA Times. He several times became a millionaire, once from a patent, from legal practice, and also from the renovation of military housing.