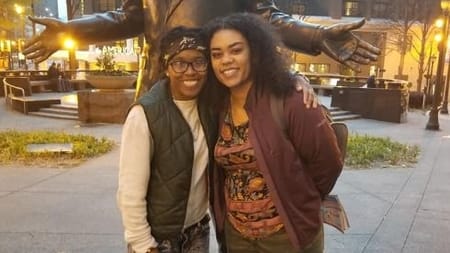 Jasmine Plummer making history by being the first-ever female quarterback in American football. The former footballer is also portrayed by Keke Palmer in the 2008 movie The Longshots.

As of now, she no longer plays football and was planning on becoming an athletic trainer and a WNBA player. Did you know? She is also a mother of two children. Let's know more about her relationship status.

What's her Marital Status? Is she Married?

Former footballer Jasmine is currently enjoying her married life with her better-half. Even though Plummer and her wife share a lot of images on Facebook, they've managed to keep Jasmine's wife's name a mystery.

In one of the comments, however, the commenter mentioned Jasmine's spouse's name as NeJae. There are no definitive date and locations about the duo marriage but the photos on Facebook dates back to as early as 2016.

The couple likes to engage in a lot of fun activities together. As per the photos on social media, the duo has posted pictures of their Christmas celebration, going to beaches, and visiting famous sites.

Yes indeed, the lovebirds share two children, one son, and one daughter. In the process of keeping the personal life away from media, there is no exact date of birth of the duos' son Artie.

Artie, however, looks very young maybe one or two years old in an old photograph taken in 2016. So, reportedly he might've been around 2015 or 2016. NeJae was pregnant in 2019 according to Facebook posts.

On April 18, moreover, they shared a photograph showing their two children including a new addition, their daughter. The duo, however, has not revealed any name about their daughter.

The Longshots is Based on Jasmine's Life

In the movie The Longshots, Keke Palmer plays the life of Plummer when she was 11-years-old. Jasmine became the first female quarterback for a junior Pop Warner Football team. Talking to Defender, she said,

"I love sports, and I just enjoy what I do. I was always taught to go after what I wanted and to be the best I could be. To me, it was just me doing what I loved and having fun with it."