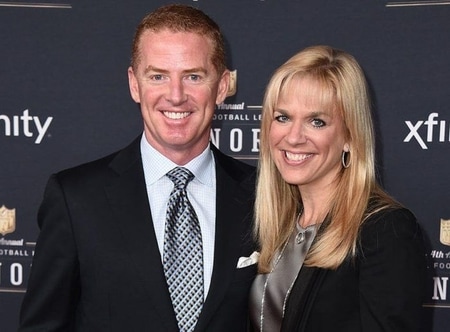 Around us, we can see many college lovers who find it difficult to survive their relationship for a long time. Especially if they are celebrities, then there are very few examples. But Jason Garrett and Brill Garrett defy this conception.

The couple is living in a blissful married life so far. They are together for more than a decade now, but many of Jason's fan has very little information about his marital life. Are you one of the fans who want to know more about the married couple? Then read along.

Jason fell in Love During a Freshman Year

Not many people know about the pair's love story until Brill gave an interview some time back. In an interview with 5 Points Blue, she shared how she met Jason for the first time.

Both of them went to Princeton University. At the University, the couple went to a Geology class three times a week. After going to that freshman class, the duo gradually fell in love with each other. Soon, they were dating and one of the most adored couples at their college.

After a few years of dating, the pair decided to take their relationship to the next level. In an intimate ceremony in 1994, the couple exchanged wedding vows with each other.

The duo hosted their big day behind closed doors. Only their family members and loved ones arrived to give their blessings to the newly married. Apart from that, neither Brill nor Jason has shared any details regarding their wedding ceremony.

What About Their Children?

In over a decade long marital life, you might think that the couple is already parents to a child. According to Heavy, the duo, however, does not share any children.

We do not know the exact reason for them not to have any kids. Maybe the pair is not ready to expand their family yet. Even though Jason does not any children of his own, growing up, he shared his childhood with his two siblings.

All or Nothing Season with Dallas Cowboys

According to the latest reports, Jason might be in the list of coaches who will be sacked. Garrett is currently serving as the coach of Jerry Jones's Dallas Cowboys. With the recent losses, Jason came under fire by the media and even suggested that the coach will be on his way out in a few days.

Talking with the NFL, Jerry said that Jason's job is excellent at the moment. The time is not right for a coaching change at the team. Jones further noted that with Jason, the team still has the chance of making out of this current dip in form. The players like Demarcus Ware, Dak Prescott, Amari Cooper, and many more plays for the team.