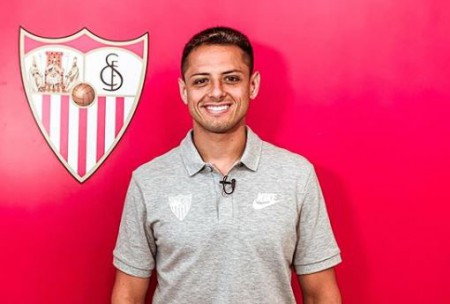 The 31-year-old, Javier Hernandez also known by his nickname, "Chicharito" is a Mexican professional footballer who currently plays as a striker for Spanish club Sevilla. Additionally, he plays for the Mexican national team.

Hernandez's minutes-per-goal ratio is among the most inventive in the history of the Premier League. He began his career playing for Mexican club Guadalajara in 2006 and in July 2010, became the first Mexican player to join Manchester United. In September 2019, Javier joined Sevilla and plays as a striker.

The rising footballer Chicharito is a married man. His wife is a hot Instagram star, Sarah Kohan. The Mexican footballer and the Australian model secretly tied their wedding knot on March 20, 2019.

Although the couple is married now, the press captured Kohan's first glimpse with the striker around July 2018. Afterward, the lovebirds became more open with their relationship.

On March 22, 2019, Javier confirmed his marital status through his Twitter account, where he wrote: "Yes, we got married, there's nothing to hide, happy weekend to everyone!". Similarly, his wife confirmed her marriage with the player via Instagram.

Chicharito's wife, Sarah Kohan, is a 25-year-old, Instagram model and travel blogger who was born in Australia. The 5-feet, 6-inches model is known for her drop-dead perfect figure and beauty. On Instagram, she has over 1.5 million followers as of November 6, 2019.

Sarah rose to fame on social media by posting pictures of her world travels in early 2017. She has visited many countries such as France, Mexico, Finland, U.K, Italy, U.S, etc. The beautiful girl is not all beauty, but she is a brainiac, as well. She has completed exchange courses at Harvard University and Columbia University.

The renown footballer is not only an excellent athlete but is also a good father. Javier and his spouse, Sarah, welcomed their first child, a son named Noah Hernandez, on June 2016, 2019. Sarah and Javier both posted a picture of their newborn son via Instagram with Sarah thanking Javier for giving the greatest gift she could ever imagine.

The couple's son is just five months old now, and they have never been so much happy before. Also, the husband-wife duo's Instagram is full of their son's adorable pictures. Noah can be interpreted as a celebrity child, just like Lionel Messi's elder son, Thiago Messi Roccuzzo.

How Much Is Javier Hernandez's Net Worth?

The Mexican footballer, Javier Hernandez, has an impressive net worth of $17 Million as of 2019. He began his career in 2006 and has played for Manchester United, Real Madrid (on loan), Bayer Leverkusen, West Ham United, and currently plays for the Spanish club, Sevilla, and the Mexican national team.

Talking about Javier's wife, Sarah has a net worth of $5 million, which she garnered through her career as a model and a travel blogger. There is no doubt that the couple lives a lavish lifestyle.

As per sources, the former highest-earning player at West Ham agreed to lower his wages to $68,287.32 (£53,000) a week. He scored two goals in his two starts for the club both in Europa League ties against Qarabag and APOEL, respectively.

The above article is about the Mexican professional footballer, Javier Chicharito Hernandez. To know about your favorite athlete, follow marriedceleb.