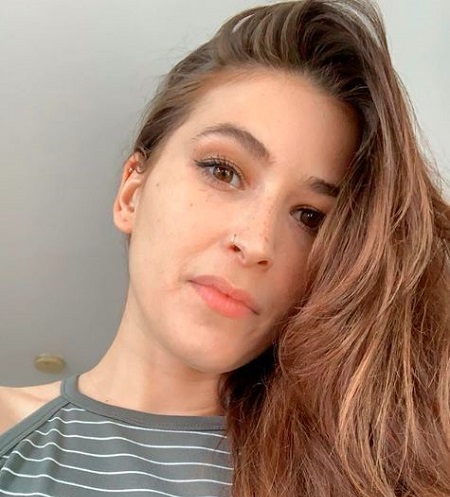 She was born in the year 1988 in the United Kingdom. She was raised by single mother Corinne Charton alongside a little sister. But not much is known about her family background to the media. As per her citizenship, she is British whereas her ethnicity is white.

As of now, the beautiful couple Charton and Culkin has been sparkling their marital relationship for seven years. They first met at a New York bar in September 2012. And since then they have been together.

When they went for a road trip around the US and then dedicated to getting married. And that same time, the lovebirds exchanged the wedding vows on August 27, 2013, privately in Lowa. In 2017, Jazz posted a throwback picture from their nuptials on her Instagram account.

She captioned: “#tbt to taking time out of our road trip to get married by the side of the road in Iowa during a storm 4 years ago today. Still the best pit stop I’ve ever made.

Before starting an intimate relationship with Jazz, the 1.68 m tall actor dated famous actress, Emma Stone, 31. She was named as one of the 100 most influential people in the world by Time magazine in 2017.

They first met on the set of film Paper Man and started dating 2010. But they broke up after a year in April 2011. Even after the spilt, they shared the screen in 2017's film Battle of the Sexes.

Welcomed the First Child In 2019

After 6 years of married, Charton and Culkin announced the exciting news that they are expecting their first child together on May 14, 2019. She even posted the baby's sonography pic on her IG wall saying: " My favourite surprise so far. We had no idea how much we wanted this until it happened".

Since then, the mom to be Jazz started posting beautiful baby bump snaps on social media. Finally, the couple became parents when they welcomed their baby girl Kinsey Sioux Culkin on  May 13, 2019. She was born at the hospital after 25 hours of labouring at home" "during a full moon on Friday the 13th," the mom, Jazz stated.

How Wealthy Is Jazz Charton?

As of now, Jazz's net worth is estimated at $100 thousand which is alike to Dixie Brubaker and Suzanne Rawlings. She has accumulated her fortune throughout her early career as a model and a foley artist. Until 2013, she worked at the Sound Department of Likeness as a foley artist.

Whereas her husband, Kieran Culkin has a whopping net value of $3 Million as of 2020. He built his worth from his three decades of successful acting gigs. Further, he reportedly makes the salary between $300,000 and $350,000 per episode from his main role in the HBO series Succession.

His made his film debut with the  John Hughes' Christmas comedy film Home Alone in 1990. And the film has earned $476.7 million under the budget of $8 Million. His next portrayed film Home Alone 2: Lost in New York grossed $359 million worldwide against a budget of $28 million in 1992.