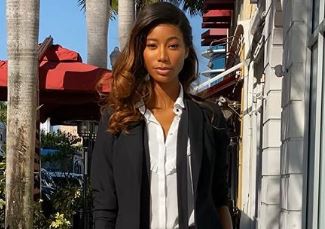 Former Vintage Swirler, Jazzma Kendrick, is a well-known model and social media sensation who performed both runway and print campaign modeling. Besides modeling jobs, she is a professional real estate who buys, sells, and Invests in houses in Miami Beach, Florida, United States.

Kendrick was born on October 24, 1996, in Miami, Florida, United States. For her education, she studied at The State University of New Jersey-Camden and Business Management at Rutgers. She holds African American ethnicity and American citizenship.

Is Jazzma Kendrick Dating Anyone Currently?

As of now, this hot and beautiful model, Jazzma, is living a single life without dating any guys. However, in the past, she made headlines when she started dating an Italian former professional footballer, Christian Vieri, in 2015.

However, she and the former football player, Vieri, 46 splits in 2017 after two years of dating when Vieri was called out for being an old racist. The reason behind their breakup, though, was that their period of the partnership was overlapping with Vieri's collaboration with Naomi Campbell.

Christian was reportedly creeping on Naomi. Besides this, the former Manager of VIP Services at the Arkadia Nightclub has been romantically spotted with Vladislav Doronin. She and Doronin, CEO of Aman Resorts, were seen in Miami on his yacht.

It is rumored that the 180 cm tall social media influencer has hooked up with American broadcaster Joe Budden. Fans began speculations when they were caught looking stupid, walking together in May 2019.

At Miami Beach streets, the unsuspecting vlogger caught Kendrick and Joe walking shoulder to shoulder down. He was attempting to power walk in front of her when Budden saw the camera, but it was already caught on tape.

But, the Miami natives model and Budden, 39, never confirmed their relationship on public despite having such romantic chemistry.

How much is Jazzma Kendrick's Net Worth?

Working as a model, real estate, and social media influencer, Jazzma has made a good fortune. To date, she has been walking the catwalk for several shows, such as Lycra Mercedes Benz Swim Week, Montce Swim, The Aguaclara 2019, and Aruba's 60 Years of Diamonds carnival.

As of now, Kendrick has a net worth of an estimated $500,000, but it has yet to be officially confirmed. Likewise, a Model's average pay is $35.45 an hour in Miami, FL, and her income might fall into the same range. Similarly, Julianne Kissinger and Hannah Palmer, an Instagram model, make couples of money from their promotion.

Similarly, the model has accumulated 306,000 followers on her official Instagram as of now. So she may be getting extra money from endorsements. Currently, she is represented by model management networks like Select Model Miami and Select Model Milano.

Besides modeling career, Kendrick is a sales agent with the Foreign realty of one Sotheby. She recently put on $90,000 for 19201 Collins Ave, Sunny Isles Beach, FL, 33160.

To read more Biographies and Gossips on Models, stay tuned to Married Celeb!!!