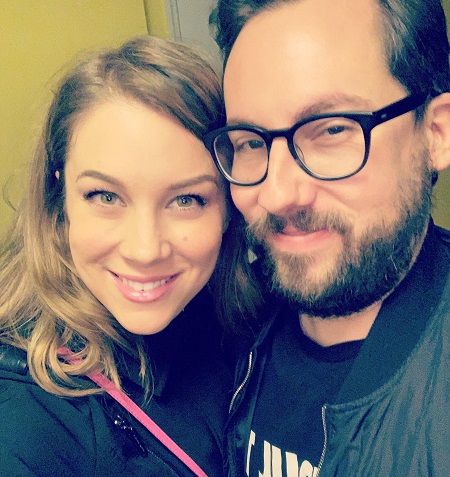 JD Harmeyer a.ka. Jamie Daniel Harmeyer who is an American radio personality and media producer finally found his perfect match. She is none other than Jennifer Tanko, a makeup artist and a retired teacher.

Let's take a glimpse about their relationship in the following sections.

As of now, The Howard Stern Show's producer JD and his better half Tank are happily married for more than two years. They seem very much happy with one another. There is no news regarding the pair having any external marital affairs and relationships.

Moreover, the duo often uploads one another's a picture on their respective social media account where they are seen having quality time together. Recently the pair were seen on the California Trip together where they enjoyed jet skiing and sunbathing on the beach.

After years of their engagement, the pair tied the wedding knot on August 25, 2018, just outside of Las Vegas. The grand ceremony was filled with the attendance of 10 guests who became bear witness to the joyous occasion.

On their big day, the bride wore a beautiful strapless wedding dress while the groom donned a grey three-piece suit. Since then, they lead a joyful marital relationship with no sign of divorce.

Got Engaged After Few Years Of Love Affairs

JD and his beautiful fiancee Jennifer became an engaged couple on February 28, 2017, after dating for two years. They publicly announced their engagement through their respective social media accounts.

On his official Twitter account, Harmeyer posted the snap of Tanko's hand wearing a beautiful diamond ring on her ring. He wrote: " She said yes. (Thanks to @IHSSof course for everything)".

When they Began Dating?

It is still not known when the Stern Show staffer JD started dating his girlfriend Tank. He used to keep his most of his love details away from the media. But it is believed to be they encounter one another for the very first time back in 2015.

Having a couple of drinks and dates the pair involved in a very serious relationship and started dating one another. After dating for more than a year the duo decided to take their relationship one step further.

In February 2017 the romantic month of the year, Harmeyer proposed to Jennifer. And the answer was straight yes.

If You are Looking for More Diversifying Articles of Your Favourite Celebrities, Then Take a Look at Married Celeb!!!