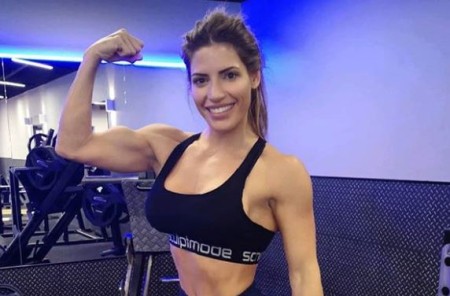 The West Twins is a familiar name for those who love fitness. The sisters named Jennifer and Lucy West are popular on social media for doing fitness shows. Today we will be talking about Jennifer West (Jenny).

Jenny West is a British fitness expert, bodybuilder, and a reality tv star. She is known for appearing in MTV's The Challenge and ITV's Survival of the Fittest (2018). Jenny has been competing since 2013 and has competed in National Amateur Bodybuilders' Association Universe.

As of now, the 33-year-old fitness trainer is single. She prefers to enjoy her career as a bodybuilder. However, Jenny had a boyfriend several years back ago.

On May 21, 2020, West revealed via Instagram that long back ago, a client shocked her by asking, 'Does your boyfriend sometimes wish you weren't so muscly?'

West recalled that at one point, she even thought of losing some muscle to look less muscular. Further, she didn't reveal when she broke up with her boyfriend. At present, Jenny is perfectly happy living a single life. Meanwhile, Lucy is a married woman.

As a fitness model/trainer, reality star, and social media sensation, Jenny West has amassed a net worth of at least $800,000. Recently, she took home $500,000 after winning the finale of MTV's reality show, The Challenge: Total Madness. Her male contestant, Johnny Bananas, also won the show.

Further, Jenny earns a hefty sum of money by promoting fitness related items. With a growing fanbase on social media, Jenny has been endorsed by major sports nutrition brands. Well, the average earning for fitness trainers in the UK is around $24,000 per year. Hence, she might earn over $20,000 a year. West owns a Mercedes Benz.

Jenny and her sister, Lucy, compete with the Physical Culture Association and bodybuilding organization. They promote fitness related tips and lifestyle on their social media accounts. Like the West Twins, another female fitness expert, Kelsey Wells, also has a decent net worth.

How The West Twins started bodybuilding?

Jenny developed an interest in physical activities at a young age. She learned gymnastics tricks in school libraries. However, she didn't start the gym until 25. Meanwhile, Lucy started bodybuilding in 2015.

The sisters' first-ever fitness competition was for the 2016 National Amateur Body Builders' Association show. In 2016, the identical twin opened a joint Instagram and Youtube account by the name The West Twins. They promote a healthy and positive fitness and mental well-being state on social media. Paige Hathaway is also an inspirational fitness expert and model.

Jenny is not a Transexual

While men get praised for having a chiseled physique, certain people think muscular women look bad. Jenny, too has faced negative comments throughout her career. She once revealed that many people comment on her gender, asking whether she is a transexual.

On May 11, 2020, Jenny posted a photo of herself with harsh words she faces online. However, the 5 feet 8-inch tall bodybuilder wrote she doesn't care if people tell her she looks like a man.

Apart from Lucy, Jenny has four other sisters and a brother. They are Anna, Isabelle, Maria, Lindsay, and Richard. Lucy is the oldest twin by seven minutes and is half an inch shorter than her sister. Their father has always encouraged their bodybuilding career.