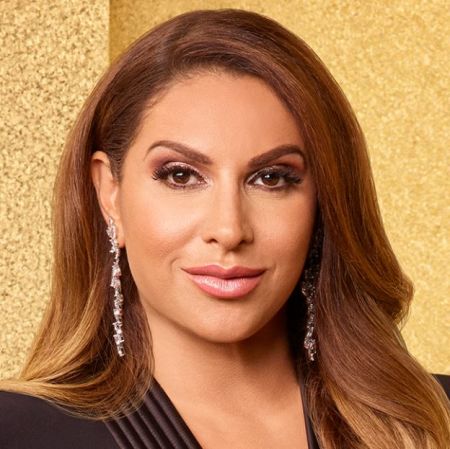 American television actor, Jennifer Aydin is famous for her appearance in the reality series, The Real Housewives of New Jersey. Aydin's first punchline was "I'm obsessed with family, traditions, and Chanel." which makes her instant famous among audiences. She also believes that money and beauty have no meaning without family.

The reality star is married to her college sweetheart, N. Bill Aydin, a plastic surgeon. Her partner is from Turkey and a bit traditional and conservative by his nature.

However, the couple started dating after graduating from college. After enjoying their company for a while, Aydin proposed Jennifer for marriage with a precious engagement ring. Moreover, they became engaged in the presence of their parents.

The love birds kissed and pronounced as husband and wife on 1st March 2002 at The Park Savoy Estate in New Jersey. Their wedding was an intimate yet lavishing ceremony held among their closed friends and families.

The married pair shares five children; three sons, and two daughters. They welcomed their first child, a son, Justin Aydin in 2005 and their first baby daughter, Gabrielle Aydin (born in 2008).

Soon after they welcomed their second son, Jacob Aydin in 2009. They are also blessed with two lovely kids, Olivia Aydin (born in 2013) and Christian Aydin (born in 2011). Currently, they're raising their kids in New Jersey.

The Real Housewives star collects a bundle of fortune from her notable works; she has a net worth of $1 million. Similarly, her spouse's bank balance is around $800 Thousand.

Aydin earns a lucrative salary in the range of $200 Thousand to $250 Thousand from her profession. Having an impressive income, she also makes handsome money from her other works which include advertisement, endorsement deals, etc.

Jennifer is promoting many fashion brands and featured in popular magazines as well. In one of her Instagram post, she is seen promoting Island to East Side's handbag, RHONJ on 14th September 2019.

Aydin also helped many brands like JM Jewels, Christian Louboutin, Portia & Scarlett, Dody's Dresses, and Carolyn Fontela. So, she might be receiving hefty paycheques from her deals.

Jennifer and her life partner bought a house in New Jersey at $2.5 Million. Moreover, her home features four bedrooms, three and a half bathroom on 2,673 square foot.

Their home also consists of a swimming pool, a garage, and a furnished kitchen. So, Aydin is living a luxurious life relishing a hefty sum of wealth from her profession.

Jennifer Aydin was born and raised in Long Island, New York. She is American by nationality and belongs to Turkish, Armenian, and Aramean ethnic background.

Aydin had a keen interest in acting from a very young age. Furthermore, she performed in various theatrical productions during her school and college time. Later, she found her true passion in her interest and decided to get into the field of acting.

Jennifer started her career as a TV actor where she made her debut appearance in the reality TV show, The Real Housewives of New Jersey in 2016 — appearing in total in 19 episodes. She shares the screen along with  Gabrielle Giudice, and Audriana Giudice also featured on the show.