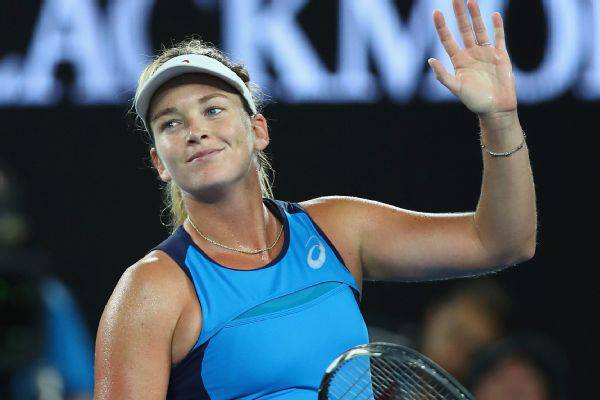 An American professional tennis player, Jennifer Brady is a various title-winning player. She has won four single title and four double titles on the ITF circuit. Moreover, she was ranked No. 60 in the top 100 list of world best singles on October 2017. Later on April 2019, she secured career-high doubles ranking at No. 48 of the world.

Jennifer Brady was born in Harrisburg, Pennsylvania, the United States on April 12, 1995.

Even though there is no information regarding her boyfriends, affairs, and relationship may be in the future, there will be something to share regarding her relationship status. The beautiful Jennifer might haven't met her prince charming till now.

Supportive Friends is a Leverage in the Sports World

Being a professional player, she has been trained with many players. Some has been very closed to her heart. She is very close to her friend Caroline Dolehide, who is also an American professional tennis player and is three years younger than Jennifer.

They two were spotted helping each other in the training session on Beijing, China. The pair has been spotted in different place of the world spending quality time with each other. Besides that, they are a terrific competitor and often seen as a challenger in the various tournament.

At the age of 24, Jennifer has achieved almost everything in the Tennis game. Besides all of her achievements, she is very fond of traveling and is known to be a food lover.

Being a professional tennis player, she often travels around the world to play tennis which includes the different States of the United States, Qatar, France, and many more countries. Recently she was spotted in the Eiffel Tower of France with her best friend Mija. Jennifer is often seen posting her photos into her Instagram.

Brady attended the University of California, Los Angeles. She made her tennis debut in Bruins tennis team in 2013. During her time in UCLA, she helped her team win the 2014 Division 1 Women's Tennis National Championship which was held in Athens, Georgia. She is a huge fan of Serena Williams.

Career Start Up as a Tennis player

Jennifer was very keen on tennis from an early age. She first played at Carlsbad (California) Classic on November 2015 in the singles main draw of a WTA tournament where she reached in the semifinals.

In September 2016 she reached the quarterfinals at Guangzhou, China where she also played in the quarter-finals of the Guangzhou doubles tournament. At the 2017 Australian Open she reached the singles main draw of a Grand Slam tournament for the first time after winning all three of her qualifying matches.

She defeated Maryna Zanevska, Elena Vesnina and Heather Watson respectively later was defeated in the fourth round with Mirjana. At the French, Open Brady lost her opening round match with Kristina Mladenovic. At the US Open, she defeated Andrea Petkovic in the first round.

On the women's double, she has won all the five titles of ITF which includes double in 2011, 2014, 2015 and 2019 respectively. She competed with different professional tennis players including her friend Caroline Dolehide.

Fortune bagged by the Jennifer Brady

Being an outstanding professional tennis player, she surely has bagged great wealth to her bank account. Her net worth in 2019 is estimated at $1 Million. Winning many of the titles she has gained a tremendous amount of cash prize.

The Right-handed player has bagged total sum of $1,912,447 as a reward from all of the tournament. Besides that, she knows how to spend and where to invest her money wisely.