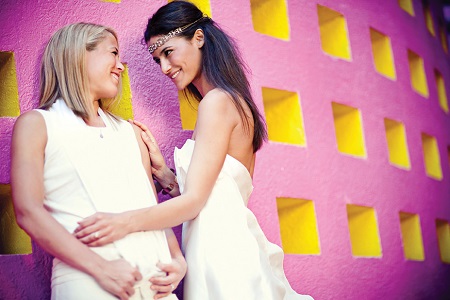 An actress of Irish, Indian, and Nigerian descent, Jessica Clark is popular for her role in TV series, True Blood, Chemistry, and Murder in the First. Furthermore, she won the New Now Next Award in 2009 in the category "Cause You're Hot."

Being at the peak, the public is more curious to know personal life rather than professional. As all know, she is an openly lesbian and was previously married too. But what caused the split? Is she single now?

Jessica Clark met her future girlfriend, Lacey Stone at the gym around 2006. At that point, they were nothing more than two perfect stranger. Later, Clark developed a crush feelings on her fitness trainer, Stone.

Eventually, the two met at a party, and Clark was the one who approached Stone.

Proposed at one of New York’s most romantic restaurants

Queen of romance, Clark choose one of New York’s most romantic restaurants: One if by Land, Two if by Sea to propose her love of life.

Knelt down passionately for a lifetime commitment, there was no chance to hear "No."

Needless to say, Stone wanted to propose too, but she knew Clark is someone who appreciates something more personal. So rather than a dramatic proposal, she surprised her one morning with cozy breakfast, a walk through Central Park and ended the day proposing with a diamond ring.

Married at stunning Mexican beach side

After 16-month as fiance and six long months of planning, the lovebird tied the knot in 2010 on the island of Las Caletas off Puerto Vallarta, Mexico, where gay marriage is legally recognized.

Their wedding was attended by a total of thirty close friends and family members. At the ceremony, Clark flaunted on the dress designed by Angel Sanchez.

After the auspicious ceremony, guests enjoyed a reception party with a Mexican buffet. Not to mention, that night was topped off with a traditional vanilla wedding cake.

As both of them were at the peak of their career, they never had a chance to go honeymoon soon but planned to take off for Machu Picchu in early 2011.

"What lasts is the pain that comes after love." Just after two years of marriage, things started to get sour, which resulted in separation.

In 2012, Clark and Stone divorced. Nevertheless, the reason behind the divorce is not yet revealed.

Yes, its long time now Clark is in an open relationship with her partner, Ruby Croak, a tattoo artist. The Two have been dating since 2013.

The actress sometimes addresses Croak as her wife, which indicates she is looking forward to celebrating marriage with her.

We Wish Luck To Jessica Clark and Ruby Croak....