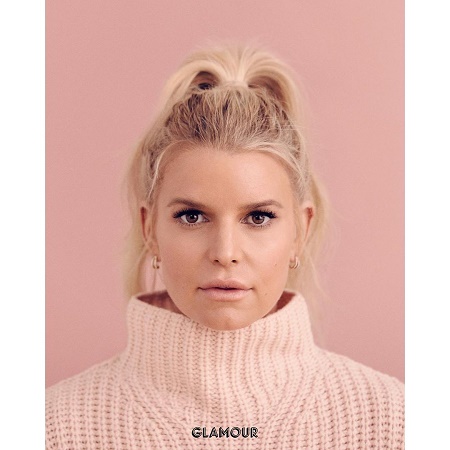 Aged 39, Jessica Simpson is one of the popular faces in the media industry. She is an American singer, actress, and fashion designer, probably known for her reality TV show, Nick and Jessica: Newlyweds.

Popstar was born on July 10, 1980, in Richardson Texas, north of Dallas as Jessica Ann Johnson. Her late father, Joe Simpson was a psychologist and a youth minister whereas mother Tina Ann Drew is an actress.

The 39-year-old singer is happily married to former American football player Eric Johnson. They announced their wedding ceremony on July 5, 2014, at California’s luxury San Yaidro Ranch hotel and resort, describing their marriage as “the happiest moment of our lives.”

America’s Sweetheart and her partner Eric tied the knot among 280 friends and family, including the singer’s parents and sister, Ashlee. But also, their close friends like actors Jessica Alba and Topher Grace had attended the party.

The bridal party included two very special members, their daughter Maxwell, 2, who played a very proud flower girl and son Ace, 13 months. “It was amazing to be able to have our babies watch us say ‘I do,’ Jess claimed.

One of the popular designer made Carolina Herrera's gown on her wedding day while the dress is embroidered in gold and a line of blue ribbon inside the gown. Whereas the groom wore a custom-made charcoal John Varvatos tuxedo and looked every part the dashing groom.

The groom, 34, too had lots to say, telling the magazine, “I saw my gorgeous wife coming towards me and she was crying.” “I think my heart was exploding a little bit.” Aww…

Similarly, the bride featured exclusively on its cover this week, Jess had 12 bridesmaids while the groom had 11 groomsmen. The bridesmaid dresses cost was around $400 - $800.

After marriage, Jess and Eric spent their wedding night in a luxurious cottage on the grounds of the ranch. It’s the same cottage former US president John F. Kennedy and Jackie Onassis Kennedy stayed in during their 1953 honeymoon.

After the ceremony, the couple released the following statement to People Magazine, saying: “We are overwhelmed with complete happiness and love having made our eternal commitment, To say ‘I do’ in front of family, friends and, most importantly, our children has been the happiest moment of our lives.”

Jessica and Eric have a pretty damn cute family

Simpson and her husband, Eric have a good looking family with three kids, Maxwell, 7, Ace, 6 and Birdie, 7 months.

On 1st May 2012, the couple finally became parents when they welcomed their bundle of joy or first baby Maxwell Drew Johnson. She even posed nude on the cover of Elle during her first pregnancy.  Moreover, she gained 70 pounds within nine months but reportedly lost 60 pounds through a strict diet.

2 years later, they enhanced their family by giving birth to their second child, Ace Knute Johnson on June 30, 2013. They shared their third baby Birdie Mae Johnson, on March 19, 2019, after having Maxwell and Ace a year apart. During her third pregnancy, she suffers a number of health issues, including bronchitis that required hospitalization.

Despite having some health problems, Jessica came out better than ever from her new pregnancy. She recently shared an Instagram showing that after giving birth to Birdie Mae, she had lost 100 pounds for half a year.

Before Eric, Jessica was known as the wife of the lead singer of the multi-platinum-selling boyband 98 Degrees, Nick Lachey. This ex was previously married from 2002 to 2006 for 4 years only.  Likewise, they first met each other in 1998 who participated in a traditional Christian wedding at a church in Jessica's native Texas.

Also, Jessica and Nick starred in the MTV reality TV, show "Newlyweds: Nick and Jessica" for 3 seasons and quickly became a hit, getting 2.4 million viewers per episode. But, later being several years of togetherness, the two finally dedicated to separate by saying, "I do," our nuptials will always hold a special place in our nostalgic hearts.

During the divorce settlement, the artist reportedly had to pay her former husband, Nick $12 million as alimony.

The fact is the Simpson and Lachey didn't live happily ever after but their stunning wedding ceremony was still a fairy tale. Their big day became a success with the help of celebrity wedding planner Mindy Weiss who managed the beautiful events.

The perfect candlelit took place in front of 350 misty-eyed guests in October. 26, 2002, at the Riverbend Church in Austin, TX. Well, the church was filled with thousands of pink roses and candles as her late dad Joe walked down the rose-covered aisle.

Apart from overflowing the ballroom of the Barton Creek Resort & Spa with an estimated 30,000 roses, the two went out for the luxurious dinner. Dinner featured Maine lobster bisque, spinach salad, and Southern crab cakes, while dessert included a five-tier cake, a carrot cake, a red velvet cake, a pound cake, and a chocolate groom cake.

For their big day celebrities like the sister of Jessica, Ashlee Simpson, and the former members of the 98 Degrees collective of Nick Lachey, Drew Lachey, and Justin Jeffries were present.

Had a Beautiful Music

Definitely, the groom's bandmates created a special cameo for their special moments. During the functions, the members of the group performed their hit," My Everything" for the gorgeous bride.

Especially, they even wrote songs for each other, where nick sang My Everything while Jessica showered love by singing a song My Love. The couple, however, claimed that no expense for their reception.

Hollywood singer, Jessica wore a custom made all lace, strapless, a-line bridal gown filled with pearls and crystals by Vera Wang in her special day. Bride hairstyle was styled by Ken Paves which was left long with curls framing her face.

Nick and Jessica: Newlyweds actress stunned in the vintage style jewelry with 11- carat Harry Winston pave diamond headband. While her hair was pinned back on each side with vintage Van Cleef and  Arpels brooches.

Despite a little bit of rain, the couple did not let bad weather rain on their parade. Following the special day, Jessica and Nick went to Fiji for their romantic honeymoon at Turtle Island.

Past Love Affair of Jessica

After parting the ways from Nick, The Newlyweds star started dating The Dallas Cowboys quarterback, Tony Romo in 2007. But later they after two years of dating, they broke up in 2009.

Moreover, Tony is in a happy conjual relationship with, Candice Crawford, an American journalist since 2011.

Also, Simpson had a love affair with American singer John Mayer, whom she met first time him at a Grammys party in 2005. Nick, 46 reportedly told Jessica that John, 42, was 'obsessed' with her 'sexually and emotionally'.

What is Jessica Simpson's 2020 worth?

Jessica has earned large earnings from various industry lines, sponsorship, and corporate advertisements other than an entertainment profile. She earns $3.5 million as an endorsement for Like Weight Watchers.

Her yearly "Dukes of Hazzard" pay accounted for $4 million while her "employee of the month" takeaway compensation was $1 million.

Most recently, she opened up about her childhood sexual abuse which led to her alcohol and pill addiction on her memoir, Open Book, published on February 4, 2020. And Amazon is selling her book for $25.17. She has also written books such as Jessica Simpson-In This Body (2004) and Take My Breath Away: Simple Piano Jessica Simpson (2005).

Today, Simpson lives in a huge house in Hidden Hills, California which she purchased from Ozzy and Sharon Osbourne for $11.5 million in 2013. The home boasts six bedrooms, a basketball court, a playground, and a large pool. Today, based on equivalent recent sales, this property is worth $15-20 million.

Know latest updates and stay in touch with marriedceleb!