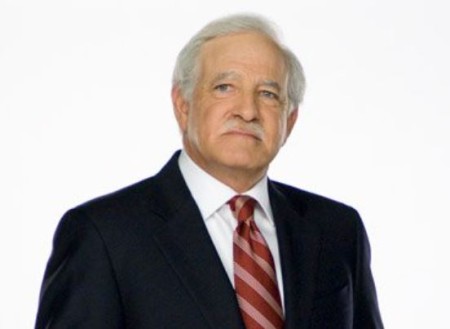 Jim Gardner is an American journalist and a gifted news writer with dead-on journalistic instincts. He is the longest-serving anchor at 6ABC Action News, who has anchored the 6 p.m. and 11 p.m. broadcasts for the past 43 years.

Jim, at the age of 72, hasn't even hinted at retirement, and he currently works for 6abc Action News/WPVI-TV in Philadelphia, Pennsylvania. He joined the station in 1976 and assumed his current position of anchor in 1977. Further, Gardner was inducted into the Broadcast Pioneers of Philadelphia Hall of Fame in 2003.

The 72-year-old veteran anchor is happily married to his wife, Amy Gardner. The couple has been married for several years as of now. Jim first met his partner at WPVI's sales department. The exact information regarding their wedding is unknown. However, Amy is the second wife of Gardner.

Jim and Amy share two adult children, a daughter named Emily and a son named Jesse Gardner. The anchor often shares pictures of his family on social media. Jim and his son travel occasionally. Further, the news reporter has two other children from his first marriage.

Before Amy, Jim was married to his ex-wife, Julie Gardner, who works as a psychologist. They shared a house in Villanova while they were married. The former husband-wife duo has two children named Josh Gardner and Jen Gardner.

After several years of marital solidarity, the 6abc anchor and his wife got divorced. To this date, Jim has never mentioned anything about his past marriage. Additionally, he has even kept his current personal life entirely secret.

The Channel 6 Action News anchor, Jim Gardner, has a net worth of $8 million as of 2020. One of the most renowned faces in Philadelphia, Jim has served over 40 years in the journalism industry. Therefore, he earns a hefty sum of money from his professional career.

Jim earns an annual salary of over $98,322 from his position as Channel 6 Action News' anchor. He owns a beautiful house in Philadelphia and has a stunning Audi for his ride. Unlike Gardner, Ducis Rodgers, who works for WPVI-TV as a sportscaster, has a somewhat lower income.

Recently, Jim and his wife, Amy, donated $25,000 to the #PHLCOVID19 Fund. The 6abc network, through its parent company Disney, joined the couple and further donated $25,000.

Jim Gardner, whose original name is James Goldman, was born on May 17, 1948, in New York City, the United States. His father, Joseph, was a well-respected surgeon who worked as the head of Mount Sinai's ENT (ear, nose, and throat) department. Meanwhile, Jim's mother, Florence, was a housewife.

Jim grew up with his two older sisters, Betty and Barbara, on the Upper East Side. Betty died due to breast cancer at age 49. Talking about his academics, Gardner graduated with a Bachelor of Arts in Political Theory from Columbia University.

Jim first reported on the Historic Student Riots at Columbia in 1968 for the university's radio station, WKCR-FM. In 1970, he became a desk assistant, writer, and producer for 1010 WINS in New York.

Since June 1, 1976, Garnder has been working for WPVI-TV. Currently, he is the solo anchor of the 6:00 p.m. and 11:00 p.m. weekday newscast. Jim hasn't officially announced the date of his retirement.