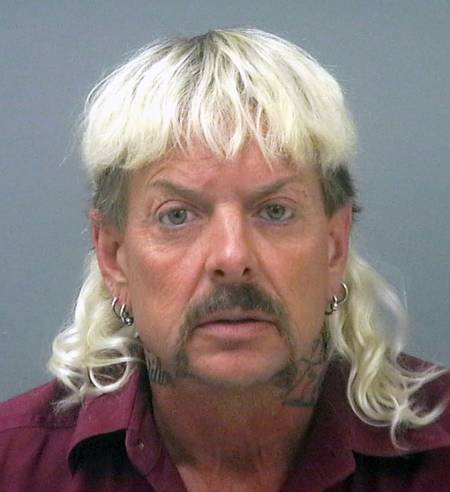 Joe Exotic is a well-known American former zoo operator and convicted Felon. He is claimed to be the most prolific breeder of tigers in the United States. he was a police officer—briefly serving as the chief of police in Eastvale, Texas

Joe Exotic was born as Joseph Allen Maldonado-Passage on March 5, 1963, in Garden city, Kansas. He was born to Shirley Schreibvogel and her husband, Francis Schreibvogel. Nothing much about his education and academic qualification has been shared with the public. In addition, He started his career as a police officer in Texas.

Joe belongs to the LGBT community. He expresses himself being interest in men. So, as of now, he is in a healthy marriage life with his husband, Dillon Passage. They have been married for almost three years. They tied their knot on December 11, 2017.

Although they have been married for almost three years, they could not remain together for a long time as they had to separate by mid-2018. Joe was convicted on 17 federal charges of animal abuse. Joe is in a twenty years-long prison sentence starting from September 2018.

Although this may be the first marriage of Dillon Passage, Joe is famous for his relationships along with his career. His relationship history starts a long time ago in the mid-1980s.

His first partner was Brian Rhyne. The two were in a formal relationship from 1986. They were living a happy and beautiful life. However, the relationship ended in 2001 after Brian died of complications from HIV.

Joe is the father of a son, Brandon Chappel. The information biological mother of Brandon is not available with the media. Some sources claim that he was born from his relationship with a girl named Kim back in the early 1980s.

After the death of Brian, He was in a relationship with J.C Hartpence. However, this relationship ended in no time. They separated in 2003. After his heartbreak, he was fell in love with John Finlay. They were in a relationship up until 2014. Like that of his previous two ties, this also ended with mutual consent.

Joe Has Been Legally Married Twice

After the president of the United States, Barack Hussein Obama passed the new law of same-sex marriage. Joe married his first husband, Travis Maldonado. Travis used to work as the Manager of Zoo of Joe located in Oklahoma.

However, Travis Maldonado died at the zoo in an accident involving a firearm. After this heartbreaking moment, He exchanged his wedding vows with Dillon Passage in December 2018.

Net Worth and Earnings of Joe Exotic

Joe Exotic has an estimated net worth of $10 Million at the time of his arrest in 2018 which is similar to Peter Morgan. He earned most of his net worth through his successful career of working as a zoo operator and serving in the United States Police.

Joe Exotic Speaks Out on Fame From Behind Bars

Recently, He obtained $250,000 from a trust fund from his grandfather. He was living a happy life, but the happiness turned into sadness due to his misconduct.

To know more about Celebrity, stay subscribed to Married Celeb!!!