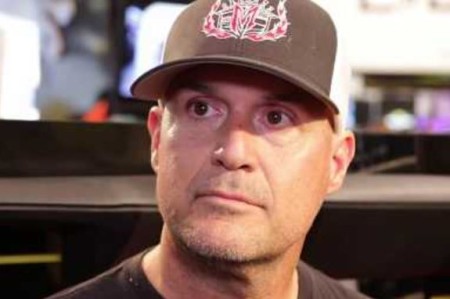 If you have watched one of the beloved tv shows, Iron Resurrection on the Motor Trend Network, then you know about Joe Martin, the show's master fabricator. He is an American TV Star and vehicle customizer who transforms worst condition automobiles into technical beauties.

Joe was born on April 16, 1969, in Illinois, but his family later relocated to Dallas, Texas. He alongside his brother, Jason Martin are the founders of Martin Bros Customs. They first began appearing on Iron Resurrection in 2016 on Velocity Channel (now Motor Trend). The latest season premiered on February 5, 2020.

The master builder, Joe is a happily married man and his wife is Amanda Martin. Like her husband, Amanda is also an automobile enthusiast and is a tv personality. Additionally, she is one of the vital cast members of Iron Resurrection.

The exact information about the couple's wedding is behind the curtain. Also, they haven't revealed their dating history as well. Do they share any kids? Well, despite being together for a long time, the husband-wife duo doesn't share any children. Like them, car builder Ian Roussel is also happily married.

Joe and Amanda travel a lot throughout the country and they mainly reside in Johnson City, Texas. The couple works with organizations and donates funds for cancer patients as one of Amanda's nephews was diagnosed with brain cancer.

Amanda Jill Keathley was born on December 11, 1973, in Red Oak, Texas. The 46-year-old businesswoman is mostly known as Joe's beautiful wife. However, she is also a main cast member on Iron Resurrection. Amanda serves as the ambassador and marketer for Martin Bros Customs.

Amanda can be seen accompanying her husband on his professional work. Along with their team, the pair customizes vehicles and sells them. A variety of new-build cars, trucks, motorcycles, and even boats are featured on their show. Recently on October 14, 2020, Amanda revealed that she and her husband are working on season five of Iron Resurrection.

The award-winning custom car and motorcycle builder, Joe has an estimated net worth of $750,000 as of 2020. He has amassed a decent amount of wealth through his mechanical expertise. Additionally, Martin is a businessman who founded Martin Bros Customs business with his brother. Unlike Joe, another master car restorer, Wayne Carini has a net worth of $20 million.

Joe earns a majority of his earnings as a master fabricator and tv star. He has been working in the automotive industry since his teenage years. At present, Martin gets paid a roughly of $43,872 from his tv show.

The Martin brothers has amazing car collections in their shop which is also open to clients for purchase. Some of their breathtaking beauties are 59 chevy truck, 64 Cadillac Triple Black, Beetle 1641 Volkswagen, 73 Firebird Barbecued Bird, and 64 Continental Lone Star Lincoln.

The Texas native built his career by designing custom cars and motorcycle. Do you know he is called as the mechanical master of Texas? Additionally, he won the Discovery Channel World Championship's Biker Build-Off competition in 2004.

Martin and his team completely renovate old and rusted automobiles that would otherwise end up in a junkyard. The team has built countless cars and motorcycles to date.