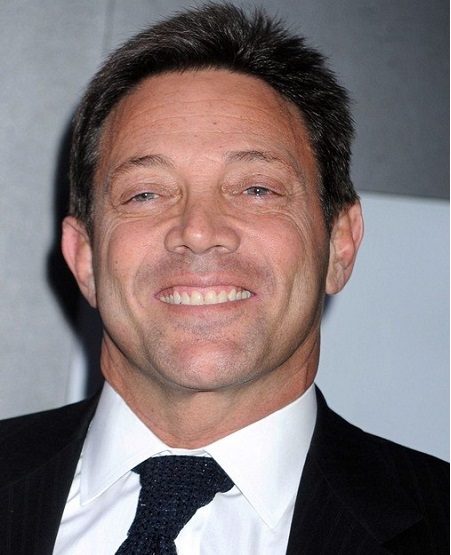 American author and motivational speaker, Jordan Belfort is known as one of the most renowned business personalities and a successful entrepreneur. He is famous for publishing the memoir The Wolf of Wall Street in 2007.

On December 25, 2013, it was converted into a film with the same name starring actor Leonardo DiCaprio. Further 2000's film Boiler Room was based on him and his firm Stratton Oakmont. Let's talk more fascinating details about him in the following sections.

Has a New Girlfriend

Yes, you have read that correctly. The former stockbroker, Belfort, aged 58, has a new partner in his life. As of now, he is in a healthy relationship with his sweetheart, Cristina Invernizzi. She is an actress and model.

According to Jordan’s Instagram, he shared romantic pictures of two celebrating a year of their togetherness on December 9 2020. He wrote: "Celebrating 1 amazing year together!'. It seems the new pair are dating each other since 2019.

Author, Belfort was once in a love relationship with Anne Koppe Belfort. She is a former trader and a businesswoman. They first met in 2007 right after serving his jail sentence and release of the memoir. After a year, they began dating in 2008.

After seven years of love affairs, they became engaged in 2015. But despite being together for a decade, they spilt in mid-2018. Moreover, Koppe has a son named Bowen Boullianne from her past marriage. He is now attending Bond University in Business on Australia’s Gold Coast.

Throughout his entire life, Jordan has been married twice. He first married his now estranged wife, Denise Lombardo, born on 11 November 1963 in Ohio, USA.

But there is not much information about their relationship on the media. They got hitched in 1985 and had divorced in 1991 after being together for five years. Then the same year, he first met his second wife, Nadine Caridi, a British-born Bay Ridge at Belfort's beach house party.

The lovebirds exchanged the wedding vows in 1991 in a private ceremony. Their lavish wedding ceremony took place at the Ocean Club on Paradise Island, Bahamas.

During their nuptials, Jordan was involved in many controversial cases and fraud businesses and in dishonest relationships with many women. Nadine later was forced to take Jordan to rehab. And in 2005, their 14 years long relationship ended like a blink of an eye.

Jordan and his second wife Nadine share two children together. They first welcomed their first child, daughter, Chandler Belfort, in 1994. Later they gave birth to their youngest child, a son Carter Belfort.

As of now, the two kids are fully grown, and Chandler has possessed a degree from New York University and is dating Connor Winter. On the other hand, Carter is a student at Muhlenberg College and is living in LA, California.

What is Jordan Belfort's Net Worth?

As of 2020, Jordan Belfort has an impressive net worth of $-100 Million. But his net worth was $200 million at its peak where he owned about 50% of the firm based on the movie and the book.

Jordan is now working as an American motivational speaker who travels the world by motivating people. Further, he co-founded the brokerage house Stratton Oakmont with Danny Porush. It employed more than $1 billion under management and over 1,000 stockbrokers at the height of its success.

After pleaded guilty to securities fraud and money laundering in 1999, he was sentenced 22 months in prison and charged a fine of $110 million.

Jordan was born on July 9, 1962, in Bronx, New York, the USA as Jordan Ross Belfort. Both of his parents Max Belfort and Leah Belfort were accountants by profession.

He has a brother named Robert Belfort. So far, he graduated from American University with a degree in biology. At that time, he and his friend Elliot Loewenstern grossed $20,000 selling Italian ice to people at a local beach from styrofoam coolers.

Later, he attended the University of Maryland School of Dentistry.