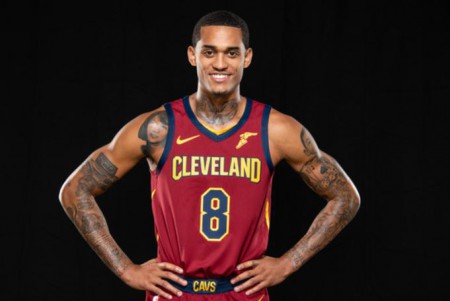 When it comes to the sports industry, very few athletes are able to leave their footprints in the world. They are known as legends of the game for their skills. We are talking about a professional basketball player, Jordan Clarkson who currently plays for the Cleveland Cavaliers. He is well known for playing as a point guard/shooting guard with his current team.

Jordan Clarkson was born on June 7, 1992, in Tampa Florida to parents Mike Clarkson and Annette Davis. Clarkson has dual citizenship as his father Mike is African-American while his mother Annette is of half Filipino descent.

Who is Jordan Clarkson Dating?

When it comes to the relationship status of Jordan Clarkson, he is currently single at the moment. Jordan has made the ladies go crazy about him as he has dated from models to Instagram star.

Clarkson is the father of a child from his relationship with Ashlee Roberson, a former basketball player. As per reports, in August 2018, Jordan had a baby with his ex-girlfriend, Ashlee back in the summer.

The ex-couple dated from 2016-2017. Jordan even shared a click holding his baby's hand on his Instagram. However, he has been maintaining his daddy status quite low-key.

But the NBA player has a long list of girlfriends he previously dated. Also, the tabloids report that Clarkson might be seeing Karizma Ramirez. But do you know as per reports Jordan helped his teammate Tristan Thompson meet Karizma?

Although the couple was spotted several times, Ramirez denied the rumors of dating Thompson and instead said that she is involved with Clarkson.

In early 2015, Clarkson dated model Chanel Iman. Besides, he is also rumored to be dating model Bella Hadid. Also, in January 2017, he was dating the beautiful model, Hailey Baldwin.

Jordan was in a low-key relationship with Kendall Jenner in 2016. As per reports, Jordan was spending time with Kendall at her Malibu House. As per the Daily Mail, the rumored couple was spotted kissing each other in the New Year's Eve.

Jordan Clarkson Net Worth and Salary

Throughout his professional Basketball career, Jordan has amassed a giant capital of over $50 Million. Previously, he signed a 4-year contract worth $50 Million with the Los Angeles Lakers.

The young and rich athlete is also reported to have several luxurious cars in his collections. Some of his favorites are Lamborghini Huracan worth $300,000, Porsche and Range Rover.

Apart from NBA earnings, Clarkson makes a good income from several endorsements, commercials, and ventures. He signed his first-ever deal with a Filipino company called 'Smart Bro'. Also, he starred in the Heineken beer commercial.

In June 2018, the current Cavaliers guard, Clarkson purchased a $3.2 million house in the Los Angeles neighborhood of Woodland Hills. The newly built 5,800-square-foot home has five beds and six bathrooms.

Clarkson bought the house at the time of his endeavor to take on during the NBA playoffs.

The 27-year-old Filipino-American athlete was the NBA All-Rookie First Team in his first year in 2015. So let's know in full details about his personal life.

Regarding his education, Jordan attended Karen Wagner High School where he averaged 10 points per game while earning honorable mention all-district accolades. In his sophomore season at the University of Tulsa, Clarkson was named to the All-Conference USA first team and the NABC All-District 11 team.

Likewise, on March 31, 2014, Jordan declared for the NBA draft. The Washington Wizards selected him in the second round with the 46th overall pick and was traded to the Los Angeles Lakers. He was the NBA All-Rookie first team in his first year and later trade to the Cavaliers in 2018.

Clarkson has extensive tattoos on his body which are both massive and beautiful. On his left shoulder is the image of his younger brother, Bear. Also, his dad, Mike occupies a small space on his left biceps.

On his left shoulder, he has inked his mother and on the right shoulder is his stepmom. Well, the overall cost of his tattoos is estimated at over $20,000.

To read more Biographies and Gossips about Basketball Players, subscribe to Married Celeb!!!