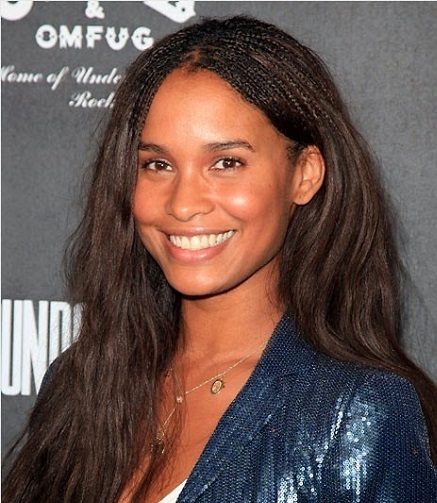 Joy Bryant is an American actress and former fashion model who currently plays the lead character, Marie Wallace, on ABC's legal TV drama For Life. But she gained initial fame after starring on NBC's series Parenthood as Jasmine Trussell. As a model, she has done modeling contracts with various brands such as CoverGirl, Ralph Lauren, Tommy Hilfiger, and Rocawear.

She was born on 18 October 1974 in The Bronx, New York, the United States to Joyce Bryant. As per her citizenship, she is American and is of mixed ethnicity. She attended the Bryant Westminster School and Ethical Culture Fieldston School. Later she graduated from Yale University.

Who is Joy Bryant's Husband?

Joy first met her future husband, Dave on the set of Welcome Home Roscoe Jenkins in mid-2006. After a year, the lovebirds exchanged the wedding vows on June 28th, 2008 at their private house in Amagansett, New York.

Before tying the knot, Bryant, 45, and Pope, 48, announced their engagement in October 2007. Since then, the couple leads a beautiful marital life together with no sign of divorce. Now, they have marked their 12 years togetherness in June 2020.

However, the duo has not shared any kids together. Sources claim that the Oxfam's Sisters on the Planet's ambassador doest want to be a mother because of her bad childhood experience. Now, they reside in Glendale.

As an actress and model, Joy has successfully obtained a suitable amount of fortune. As of early May 2020, she has an impressive net worth of $2 million. Similarly, her salary might fall in the range between $46,955 and $69,571, which is the average salary of an actress in the United States.

Further, Bryant has starred as Woman at Web on American superhero film Spider-Man 2, which received widespread critical acclaim. And the film successfully became the third highest-grossing film of the year 2004 by grossing $789 million worldwide. It was released on June 30, 2004, in both IMax and theatres.A

Additionally, she has appeared on films such as Antwone Fisher, Kite, Honey, Welcome Home Roscoe Jenkins, Get Rich or Die Tryin, Hit and Run, and About Last Night.

Early in her career, the 1.75 m tall Joy initially signed contracts with Tommy Hilfiger as a fashion model. She then worked for Victoria's Secret lingerie catalog as a cover subject. Before that, she even played a small role in Ill Al Skratch's music video I'll Take Her.

As a model, Byrant has worked for Ralph Lauren and has also featured in advertising for Gap. Similarly, she has dome photoshoot for the cover of Teen Vogue, Rolling Out, Complex, Lonny, and Domino. She has made appearances for Playboy, Stuff, and Celebrity Skin.

In 2001, Joy made her acting debut in the TV film, Carmen: A Hip Hopera, opposite Beyoncé Knowles and Rah Digga. But her breakthrough came when she acted as U.S. Navy sailor on biographical drama film Antwone Fisher in 2002.

Not only movies but she has performed on TV shows like ER, Love Bites, Rosewood, Parenthood, and Ballers. In 2019, she starred Netflix's show Trinkets as Lori Foster in 6 episodes, where Brianna Hildebrand now stars. Now, Byrant co-stars on For Life.