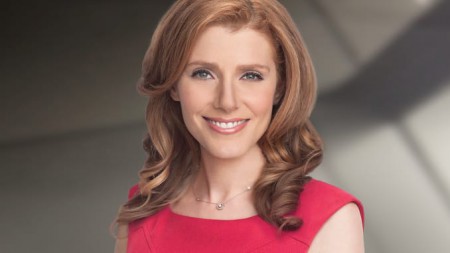 One of the most promising business journalists, Julia Boorstin, is currently working as the Senior Media and Entertainment Correspondent for CNBC. Previously, she worked for Fortune Magazine as a business writer and reporter from 2000-2006.

In 2003, 2004, and 2006, Julia was named to the "TJFR 30 under 30" list of the most promising business journalists under 30 years old. Famous breaking news anchor, Sue Herera, also works for CNBC. Apart from having a successful professional career, Julia has a joyful married life. The resident of Los Angeles, Boorstin, is a married woman and has two children.

The 40-year-old, Julia Boorstin is a married woman, and her husband is film producer and actor, Couper Samuelson. The longtime lovers began dating around 2004, and in 2006 Couper proposed Julia asking her to be his wife.

The lovers exchanged their wedding vows on December 16, 2007, in a beautiful wedding ceremony. Further, their nuptial was held in Beverly Hills, California. It has been almost twelve years since Julia and Couper's marital solidarity, but there is no sign of their separation. They carry out their parental responsibility perfectly despite having busy schedules.

As mentioned, Julia, the journalist and her partner, Couper, a film producer, first met in 2004 through mutual friends introduced, but both were reluctant to start a relationship initially.

After a brief meeting at the 2004 Sundance Film Festival, both realized how much they had in common. With time the couple developed a mutual respect and love for each other and three years later became each other's, life partners.

The 40-year-old, Couper Samuelson works as a film producer and actor. He is the President of Feature Films at Blumhouse Productions, which has produced successful movies like Paranormal Activity, The Purge, and Ouija franchises, which have grossed more than $1.4 billion worldwide.

Previously, Couper worked as the development executive at Paramount Pictures and 2929 Entertainment. He is the student of History and Literature at Harvard University.

Julia and her husband's joyous married life is flattered with the presence of two adorable sons. They welcomed their first son named Henry Samuelson on July 13, 2011. He is eight years old as of 2019 and studies in primary school.

Similarly, the couple welcomed their second child, a son in February 2015, but there are little details about him. Moreover, the family of four resides in Los Angeles, California.

How Much Is Julia Boorstin's Net Worth?

The CNBC's Senior Media & Entertainment Correspondent, Mrs. Julia Boorstin, has a net worth of $800,000, which she has amassed through her journalism career. The average salary for a journalist at CNBC news channel is around $153,000; hence, she inevitably makes a substantial amount of income from her profession.

The honor graduate student from Princeton University, Julia, was named "TJFR 30 under 30" by The Journalist and Financial Reporting newsletter. Before joining CNBC, Julia was a business writer and reporter for Fortune magazine. Former CNBC anchor, Jackie DeAngelis also has a similar net worth.

At the present moment, Boorstin is the Senior Media and entertainment correspondent at CNBC, and in the coming days, her net worth might increase even more.