Home married Are Justin Blake and Tyler Brown Still Together?

Are Justin Blake and Tyler Brown Still Together? 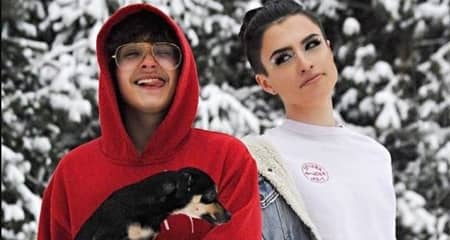 The twenty-year-old boy, Justin Blake, is already living in his dream. YouTube, Tik Tok, Facebook, Instagram all of these social sites are conquered by this person.

Blake holds fan following of over 1 million in Tik Tok and Instagram. Impressively every video posted by him is watched by millions of his fans around the world in a certain period.

So, let us check on him how he is so famous at this young age? and what makes him so unique?

Who is Justin Blake's Boyfriend?

The two sensational personalities, Justin and Tyler Brown, have been dating one another since October 2017. Not only they are lover one another, but also they are best buddies and are a partner in crimes.

Tyler, who rose to the stardom from 2015, also holds over 1.5 Million followers in his Instagram account. At the age of eight, he even appeared on The Ellen DeGeneres show.

Further, the pair is often seen hanging out together in various part of the world. In the posts, they inform their fans from their respective social sites account. Recently, Justin traveled to Los Angeles to meet his boyfriend, Tyler, who is residing there.

Before bounded in relationship with the Tyler, Justin dated Raegan Beast for one year. Raegan also an Instagram star who has a fan following hundred of thousand on Instagram and over Million in the Tik Tok.

The two began their dating life back in 2016, and within a year of their relationship, they parted from each in 2017. However, none of the parties has spoken regarding their reason for separation.

Though the ex-coupe are now choosing their separate paths, they are still known to be good friends.

Are Justin Blake and Tyler Brown going to Marry?

The two internet giants have been ruling the social media from the past two to three years. As of now, they are very close to one another and love each other companionship.

They often upload one another photo in their respective social sites account, captioning, " I have found my love of life." However, their fans are still admiring whether the duo will get married or not in the future? But none of the party has spoken about their plans yet.

Further, they frequently appear in one another's video, where they are seen flirting each other. Which makes the plot in the content more exciting for the viewers. They even openly spoke about their transgender experiences in the videos.